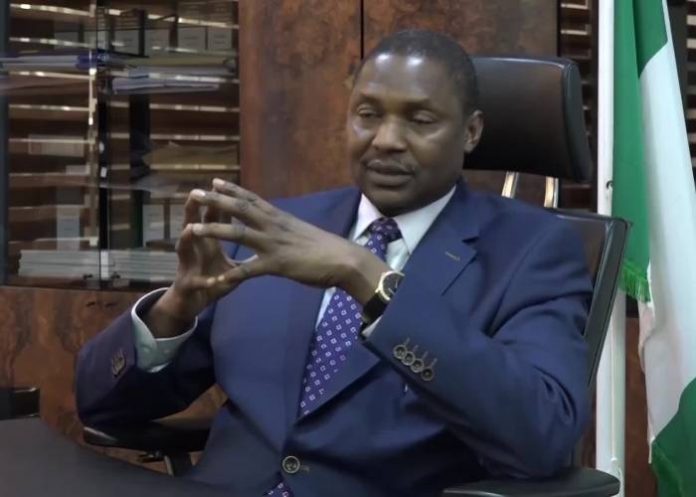 The Attorney-General of the Federation and Minister of Justice, Abubakar Malami, SAN, says the federal government had the right to continually detain Sahara Reporters Publisher, Omoyele Sowore; and a former National Security Adviser, Col. Sambo Dasuki (retd.), despite court orders.

Malami said this during a programme titled, ‘Good Morning Nigeria’ on NTA on Thursday.

The minister said the constitution gives the government the right to appeal court orders to the level of the Supreme Court.

He said during the process of applying for variation of court orders or appealing judgements, the enforcement of that court order can be delayed and this ought not to be termed as disobedience to court orders.

When asked if this was what happened in the cases of Dasuki and Sowore, the AGF said, “There were applications for setting aside orders; there were appeals for stay of execution all through. So, until those matters reach the Supreme Court and it takes the final decision, relating there, you are still operating within the ambit and context of rule of law.”

Malami, who had come under intense criticism for disobedience to court orders, said Nigerians must understand that not all court orders will be obeyed immediately.

He said it was a common misconception that all court orders must be obeyed immediately.

The AGF stated, “Perhaps I need to clear the air on how the rule of law operates within the context of the Nigerian constitution. We have multiple and a plethora of judicial decisions that establishes a fact that when you are challenging a court order through a judicial process, the idea of disobedience to that court order does not arise.

“The misapprehension that set into the system and deliberately put in the public space is the fact that once there is a court order, you must unconditionally comply. You can only be adjudged being in disobedience of a court order when you don’t take advantage of the constitutional powers, rights accorded to you by appealing against the order and perhaps seeking for stay of execution of the order or perhaps you don’t take any steps seeking variation of the court order.”

Newsmen, however, report that in the case of Sowore, the DSS never stated that its refusal to release him was based on an appeal of his bail granted by the court.

Rather, the DSS, through its spokesman, Peter Afunnaya, gave several reasons for about a month, some of which included that his lawyer, Mr. Femi Falana (SAN), refused to come to take his bail or that the agency would only release him to a surety.

In another instance, Afunnaya said, “We cannot just release Sowore and ask him to go because he may be knocked down by a vehicle at the gate.”

Sowore was later released but re-arrested inside the court the following day for reasons unstated.

The Buhari regime has come under intense criticisms from rights groups locally and internationally for human rights abuses and disobedience to court orders.

In some instances, when persons are released in compliance with court orders, they are re-arrested and detained indefinitely.

Malami, however, stated that the decision to release Dasuki and Sowore recently was not based on any international pressure but the prerogative of mercy.