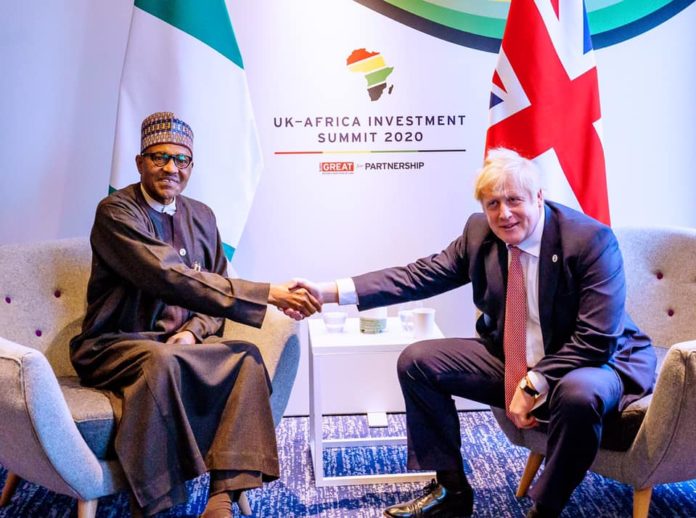 The UK has recently announced its commitment to support Nigeria and other African countries with about £127 million.

This, according to the current Central Bank of Nigeria’s exchange rate, is about N50 billion.

The development was disclosed Monday in the UK government statement for the UK-Africa Investment Summit 2020.

According to the statement, the summit laid the foundations for new partnerships between the UK and African nations based on trade, investment, shared values, and mutual interest.

President Muhammadu Buhari, who departed Abuja for London on Friday, was also at the summit.

The UK said the economic transformation would be particularly in growth sectors that can create quality jobs.

“Summit pre-events in agriculture and manufacturing, attended by senior UK and African business leaders, demonstrated the huge breadth of opportunities in these sectors and the growing need for investment.

“The Summit also showcased huge opportunities: in the ‘fourth industrial revolution’ underway in Africa as new technologies like AI, 3D-printing and drones are deployed; in Africa’s rapidly growing cities; and through unleashing the potential of women and girls to drive economic transformation,” it said.

The UK said it significantly wants to uplift work on women’s economic empowerment by expanding the work and opportunities for women programs across Africa.

It also declared a £3.5 million fund for the expansion of the SheTrades program in Nigeria, Ghana, and Kenya.

Launched in Nigeria by the International Trade Centre in June 2018, the SheTrades in the Commonwealth Nigeria project aims to drive increased trade, productivity, and competitiveness for women entrepreneurs and women-owned companies to ensure that they play an active role in international trade.

It committed £2 million for funding the extension of women’s economic empowerment work in Mozambique.

The UK also promised to fund Nigeria and South Africa with £25 million to deliver new partnerships with Investment Promotion Agencies in these countries.

Also, £45 million was set aside to deliver a new Digital Access Program in Nigeria, Kenya, and South-Africa.

This is to increase connectivity and digital skills of marginalised communities, build cybersecurity capacity and establish Tech Hubs to grow the local digital economy, and empower start-ups with the skills needed to expand globally.

Up to £30 million was set aside to establish a new UK Centre for Cities and Infrastructure to enable African governments and city authorities to access expertise to improve how cities are planned, built and run.

An additional £15 million was declared to fund the provision of rapid response to tackle the barriers to better infrastructure and cities, through an extension to the cities and infrastructure for growth program.

It said it will ensure even closer collaboration with Egypt through a new UK-Egypt Joint Statement on economic cooperation.

In all, the UK said it would expand the Manufacturing Africa programme, which aims to generate hundreds of millions of pounds of new foreign direct investment in manufacturing, into West Africa.