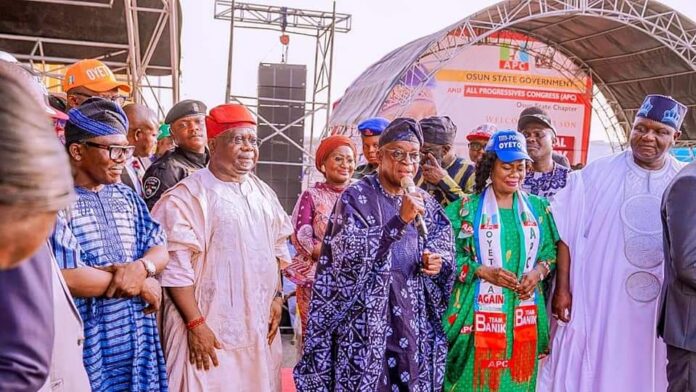 In what looked like a carnival, the entire party structures of the All Progressives Congress (APC) in Osun State tumultuously welcomed and received the newly-elected National Secretary of the party, Otunba Iyiola Omisore to the State.

The party’s faithful who trooped out in large number assembled at the popular Nelson Mandela Freedom Park, Osogbo, where the Ife-born seasoned politician was given a rousing welcome laced with fanfare.

Otunba Omisore returned to the State on Thursday, for the first time after he emerged the National Secretary at the National Convention of the ruling party held on Saturday, March 26, in Abuja.

This is even as the new party’s national scribe described his emergence as a victory for all to entrench quality leadership in all ramifications and ensure all-round victory for the party in the next Osun guber poll and next year’s general elections.

Addressing the mamonth crowd, Otunba Omisore said, “My emergence as the new National Secretary of our party portends greatness, victory and all-round success for Osun in particular, and indeed, Nigeria, in general.

“As you all know, our State is known for progressives, we are known for APC and we are overwhelmed today that we have this opportunity. I am honoured today and I urge our people to show appreciation by voting massively for our party in the next governorship election in the State and in the general general election.

“First and foremost, let’s thank God for His mercy on us. He has been so merciful to us. I thank Mr. Governor for making today a reality. I accept your efforts that translated to what I am now. I thank Asiwaju Bola Ahmed Tinubu, our leader, for his support. I thank Chief Adebisi Akande for his support. I thank all the Governors, most importantly in the Southwest, and our party faithful in the Southwest in particular and Nigeria in general.

“The best way to reciprocate this is to vote massively in the next governorship election. We must do everything right from now to ensure that our party coasts to victory. As we can see, the Administration of Governor Oyetola has brought so many developmental strides to the State, which we have never witnessed before. Is it regular salaries one wants to mention or infrastructure or education or health among other socioeconomic interventions of the Administration.

“I urge the people of Osun and our party members in particular that it is our time now. So, we must justify this with massive votes. We must prove our weights and capacity that we are ever ready for victory and the difference must be clear in the July 16 governorship election”, he counseled.

In his remarks, Governor Adegboyega Oyetola extolled the party faithful in the State for their firm belief in his Administration and for showing their unalloyed support at all times to ensure victory for the party.

“Today is not a speech-making day. We are here to give gratitude to God. God has been very merciful to us. When I was there, I was a caretaker member, but now, our State has been blessed with National Secretary which is a permanent position. I thank Asiwaju Bola Ahmed Tinubu, Chief Adebisi Akande, Southwest Governors for their support all through.

“As you all know, we have never had it so good like this. What we used to have was Ex-officio. We have never had a National Secretary. Senator Omisore is now a member of National Working Committee and National Executive Council of our great party.

“I commend your massive turnout in the last primary election as we had 222, 169 votes but what we are targeting now is over 450, 000 votes. I am assuring you that more good things are underway for all in our second term in office. After election, everybody will be more satisfied. As you can see, God has always been on our side. When I saw our efforts to transform Olaiya flyover, I marvelled and I gave thanks to God.

“So, please, be prepared for the next governorship election. I can see that you are ready for action and without fear, with you, I have confidence in God that our party will win. We are very ready,” Oyetola said.

In their separate remarks, the APC State Chairman, Prince Gboyega Famodun and former Deputy Governor, Mrs. Titilayo Laoye Ponle, lauded the party members in the State for their continued support.

They described the emergence of Senator Iyiola Omisore as the National Secretary of the party as a welcome development, just as they assured the party faithful of more wins in all the elections in the State.