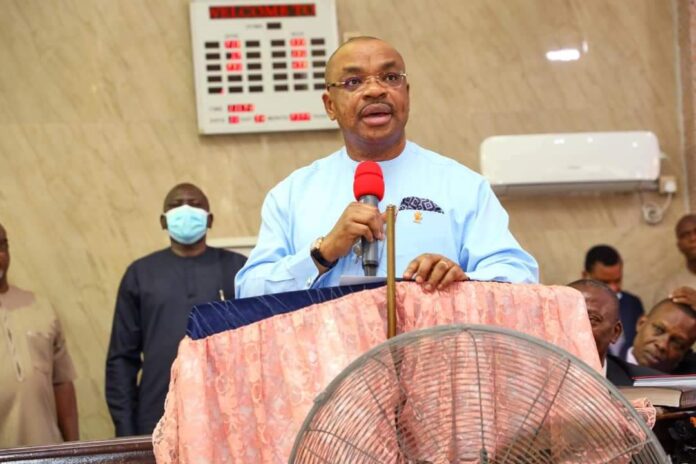 Churches in Akwa Ibom State have been tasked to rise to the divinely ordained responsibilities of helping the government to shape up the society and upholding leaders in prayers.

Governor Udom Emmanuel stated this on Friday at Qua Iboe Church, 2 Abak Road, Uyo, where he, in company of his wife, Dr Martha Emmanuel, and members of the state Executive Council, attended a special Good Friday service, to commemorate the crucifixion of Jesus Christ.

The Governor drew the attention of the church to the abnormally of lots of people in the society still being unreached by the church and urged the church to expand its outreach to affect more lives, so as to ease the work of social control for the government.

According to him, “It is the church that should help the government shape up the society, because that is the great commission that God gave the church.

“Once the church is able to shape the society the work of government will be easy”.

Decrying the poor state of affairs in the country, Governor Emmanuel said from his experience in going about to woo investors, it now takes 20 times the effort it took to bring an investor into the country compared to what it used to be, adding that the country was in such a critical situation that requires all, including the church, to play a role towards fixing it.

“The primary responsibility God gave to the church is to pray for leaders. We are at a very critical stage in this country. It’s not a time to say nothing concerns me. It concerns everybody including the church.”

However, the Governor acknowledged the support the state has enjoyed from the church within the period of his administration and thanked God that Akwa Ibom was evidently faring better in terms of development projects.

The Akwa Ibom State Chief Executive urged the people to follow God’s directions on the people in the task of electing new leaders as Nigerians prepare for the 2023 elections.

The resident Pastor of Qua Iboe Church at Abak road, Reverend Donald Ekpo, in a sermon titled ‘The Power of the Cross:, culled from John 19:7-12 and Luke 23:43, expatiated on the implications and essence of Good Friday to mankind.

The cleric urged Christians to key into the blessings of the sacrifice of Christ which the season signifies and receive forgiveness of sins and eternal blessings.