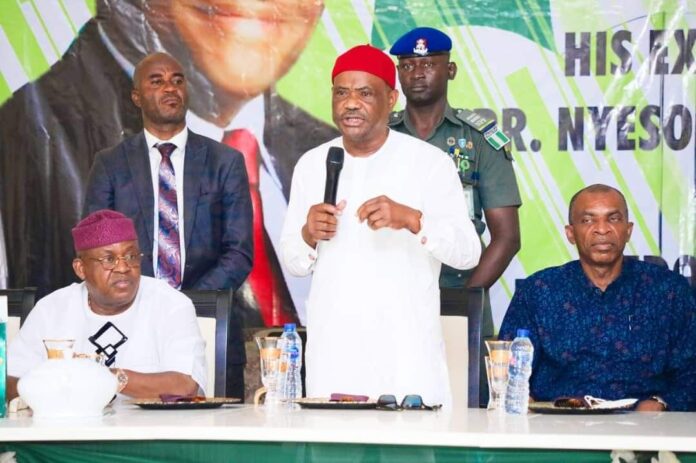 Rivers State governor, Nyesom Ezenwo Wike has told delegates of the Peoples Democratic Party (PDP) in Edo State that he is the only presidential aspirant that can truly secure electoral victory for the party in 2023 general election.

Speaking to them during his consultation with them in Benin City on Thursday, Governor Wike said the PDP needs a candidate who can take power from the All Progressives Congress (APC) courageously and he is the only person who can defeat them in 2023.

“What PDP needs now is to win election. It is about who has the capacity to face APC. I think, I am the one amongst all of us with such capacity.

“This party has given me everything and I owe it a duty to work for the party to make sure it takes over power in 2023. I have not left this party since 1998 And I am not going to leave the party.

“If we truly want to win this election give me the opportunity, give me the ticket and wait to see what will happen in 2023. Giving me ticket means we are almost there. This excuse of our party losing election will end by using Wike as the candidate of the PDP.”

Governor Wike reiterated that Nigeria requires a leader with courage who will fearlessly steer the affairs of the country towards tackling the current problems of insecurity, and lack of growth in the economic sector.

He wondered how the nation’s economy can be good when there is insecurity. According to him, “ who will come to invest in a country that is largely not secured and how would agriculture flourish when farmers can not go to farm?

“The major thing in governance is the protection of life and property. Then you’ll see that all other things will follow.

The governor pointed out that first of all, PDP must win the election with the right candidate who is people oriented before addressing those problems.

Governor Wike stated that he is fully prepared for the office that he seeks with such capability to assemble the best brains who will not rest on their oars because of the committed leadership that he will provide.

“But I want to say for us we need a president who will say it as it. For us today, Nigeria is sleeping, we need a Wike to wake Nigeria.”

Earlier, the Rivers State governor had paid a courtesy visit to the Oba of Benin, Omo N’Oba N’Edo Uku’ Akpolokpolo Ewuare II, to inform him of his ambition and seek royal blessings.

Governor Wike told the Oba that he is one Nigerian who cannot fold his arms and watch the country slide without doing anything.

“I believe that by the grace of God, if the Peoples Democratic Party (PDP) gives me the mandate to fly the flag of the party, I think I have the experience to help this country to be better than what it is today giving my experience as a former Chairman of Local Government, as Minister of State and Supervising Minister of Education and now Governor.”

“This journey that you have embarked on, we are comfortable with you. You know already that I have personal love for you.”