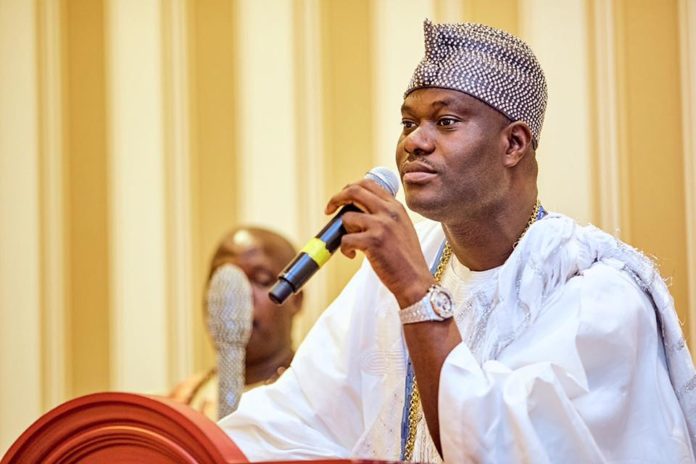 The Ooni of Ife, Oba Adeyeye Ogunwusi, will visit Ekiti today to resolve the crisis between Governor Kayode Fayemi and some aggrieved monarchs, The Nation can authoritatively report.

A source said Fayemi and the aggrieved monarchs had visited the Ooni at separate times to brief him on the crisis and reasons for their actions. It was also learnt that Oba Ogunwusi had already offered possible solutions to the impasse which both sides respected. They also agreed to meet with him in Ado-Ekiti today to finalise issues before Oba Adeyemi wrote a letter to Fayemi.

But a source said oba Ogunwusi had already reached an advanced stage in resolving the crisis before Alaafin’s letter.

“This matter was almost fully resolved and there is no going back. The kings went to the Ooni to explain the crisis after which he reached out to Governor Fayemi.

“Oba Ogunwusi and the governor had a fruitful discussion and they agreed to meet the monarch in Ado-Ekiti today, to officially pronounce an end to the crisis. I really do not understand anything about the letter that came from the Alaafin.”

The council was thrown into leadership crisis last August when Governor Fayemi allegedly facilitated the Alawe of Ilawe-Ekiti, Oba Adebanji Alabi, in becoming chairman of the Ekiti Council of Traditional rulers.

This made 16 of the leading members shun council meetings and government activities as they posited that the Alawe is not qualified to chairman the council.

The Ekiti State Council of Traditional Rulers has cautioned the Alaafin of Oyo, Oba Lamidi Adeyemi III, against meddling in its internal affairs.

The council told Oba Adeyemi to restrict himself to monarchical affairs in Oyo State.

A March 14 letter signed by its Chairman, the Alawe of Ilawe-Ekiti, Oba Adebanji Alabi, to Oyo State Governor Seyi Makinde, urged him to stop Oba Adeyemi from his ‘undue interference’ in the internal affairs of Ekiti Obas.

The letter, ‘Request to stop undue interference of His Majesty, Oba Lamidi Adeyemi, in the internal affairs of Ekiti Obas’, was a reaction to the Alaafin’s alleged letter to Governor Kayode Fayemi.

Oba Adeyemi, in a March 12 letter, warned Fayemi against treating the traditional institution with levity. This followed a query issued by Fayemi to 11 prominent monarchs for alleged insubordination.

The March 11 query – ‘Re: Absence from state functions and Council of Traditional Rulers’ Monthly Meetings’ – was signed by A.O. Adeoye, on behalf of the Permanent Secretary of the Bureau of Chieftaincy Affairs. The monarchs were given 72 hours to reply.

The governor and some aggrieved monarchs had been at loggerheads since July 31, 2019, over Oba Alabi’s appointment as chairman of the Council of Traditional Rulers.

In a writ of summons before the Ekiti High Court, the 17 aggrieved kings asked the court to reverse Fayemi’s action on the premise that the Alawe was not recognised by statute to chair the council.

They argued that they had the exclusive right to head the council, among the 22 members, in line with the extant tradition and State Chieftaincy Laws. The monarchs threatened not to attend Alawe’s inauguration as Council Chair and any meeting where he presides.

But the other 11 have been shunning the council meeting and government functions since August 2019.

Governor Fayemi said the monarch’s deliberate actions and inactions, without any justification, negates the administration of chieftaincy institution.

Oba Adeyemi said he wrote on behalf of other prominent traditional rulers in Yorubaland, including the Ooni of Ife, Oba Adeyeye Ogunwusi; Awujale of Ijebuland Oba Sikiru Adetona and Alake of Egbaland Oba Gbadebo Adedotun. He said the Yoruba traditional institution was ancestral and spiritual, unlike some tribes where nothing is attached to their traditional institutions.

He urged Fayemi to avoid degrading the traditional institution, saying actions that could cause civil unrest at the expense of the peace and well-being of the citizens he swore to protect should be jettisoned.

But Oba Alabi said Alaafin’s conduct was ‘unbecoming and absolutely unwarranted’. He added that Oba Adeyemi had no business dabbling into chieftaincy administration in Ekiti State.

According to him, Alaafin’s letter was unwarranted, misguided and lacking in merit.

The letter reads: “It was written without adequate information and knowledge of our chieftaincy matters. The Ekiti State Council of Traditional Rulers takes exception to Alaafin’s letter, which is absolutely unwarranted, as he cannot superintend over the monarchy in Ekiti State.

“Ekiti State was never and can never be part of Oyo Empire. We, therefore, respectfully ask Governor Makinde to stop the Alaafin from his meddlesomeness in the internal affairs of Ekiti State.

“Oba Adeyemi’s letter contained many misrepresented facts and inaccurate accounts of events between the government and the traditional institution in Ekiti State, which could not have been written in consultation with the revered monarchs mentioned in the letter, and who did not sign same.

“It is a matter of fact and law that grading, classification and composition of Council of Obas in Ekiti State, and perhaps anywhere in Nigeria, is governed by law through government gazettes, even from the colonial era.

“From his letter, the Alaafin is unable to define what qualifies an Oba to be a PeluPelu Oba. He is not aware of the fact that among the first group of kings who formed the association in 1900 were Deji of Akure (Ondo State) and Owalobo of Obo Ayegunle (Kwara State), who have since left the association. He is also not aware that some kings joined the group in 1909 – Atta Ayede 1929 (Elemure); 1947 (Alawe, Arajaka, Olujido and Olosi). Minutes of the Pelupelu meetings of those periods are still available.

“In 1971, the Olomuo was admitted to the PeluPelu status by then Governor of Western State, the late Gen. Adeyinka Adebayo. It should be noted that the 17 kings are presently laying claim to PeluPelu Obaship in Ekiti State. The government, in October 2018, recognised 22 kings as PeluPelu, and no one raised an eyebrow when then Governor Ayo Fayose added the 22nd member – the Oluyin of Iyin – Ekiti – in August 2018. What is therefore sacrosanct about the number of PeluPelu Obas which the Alaafin puts at 16?

“We, therefore say, with all sense of authority and responsibility, that Alaafin goofed to say that from time immemorial, Obaship leadership had been within the 16 kings who he could neither name nor mention. He only pretends not to know that the number of PeluPelu Obas has never been static.

“Unfortunately, Alaafin said his source of information was ‘hearsay’, yet he refused to verify his erroneous fact before falsely accusing Governor Fayemi of neglect. He refused to say those he considers as subordinate kings. Subordinate to who?

“Alaafin is no doubt an Oba who enjoys stirring controversies and crisis where there are none. He is without doubt a meddlesome interloper who is bent on exporting the crisis he engineered in old Oyo State, when the traditional council was unable to hold a single meeting because of leadership tussle between him and the Ooni of Ife until Osun was carved out of the old Oyo State.

“Moreover, the little disagreement among Ekiti kings has not affected the functionality of our traditional council. We hold our meetings statutorily unlike the traditional council under Alaafin that has long been grounded. How does he give what he does not have?

“Ekiti monarchs are not Alaafin’s ajeles, hence, his current voyage into our internal affair is unwarranted. Alaafin has no moral right or justification to interfere in the matter of traditional rulers’ administration in Ekiti State.

“We say with all sense of authority and responsibility that Alaafin’s letter is borne out of ignorance. Let him remove the log in his eyes before seeking to remove the speck from others. We also advise Governor Fayemi not to dignify Alaafin’s letter with any response because it is clearly ill-motivated and in bad faith.”