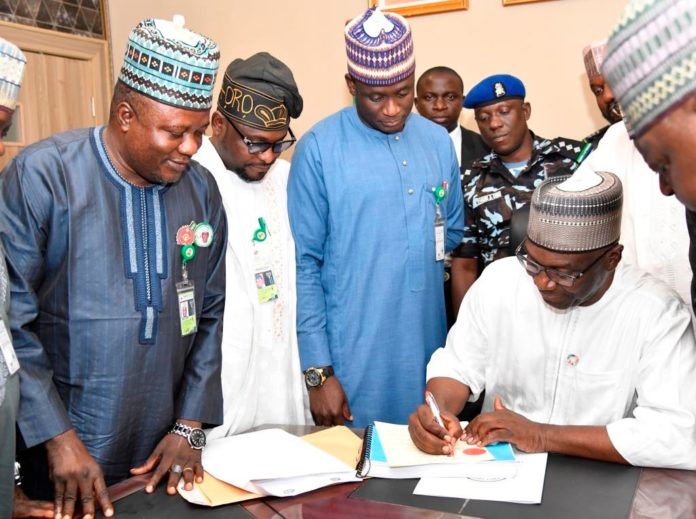 Kwara State Governor AbdulRahman AbdulRazaq on Thursday assented to the 2020 appropriation bill, saying the document was designed to truly rebuild the state in a manner that uplifts people from poverty and addresses infrastructural deficit.

AbdulRazaq commended the House of Assembly for the thorough scrutiny of the budget proposal and for its speedy passage, recalling how he had told some members of the executive that the lawmakers were empowered to make input into the budget because they are the direct representatives of the people.

In the assented budget, the capital expenditure was reviewed to 55.04percent, up from 53 percent the Governor had presented on December 18. The parliament also cut the recurrent expenditure to 44.96 percent, further down from 47 percent in the original copy. Overall, the budget increased by N476m in favour of capital expenditure.

“This is not a rubber stamp budget. I know what is in it and I agree with it in totality. I know there are changes but I agree with it because as representatives of the people, you’re closer to the people and can make input into the budget. It’s all for the good of our people,” the Governor said shortly after signing the budget.

Apart from various budgets which he said would drive socioeconomic and infrastructural growth, AbdulRazaq said provisions were deliberately made to lift as many people as possible out of extreme poverty.

He specifically commended the lawmakers for approving the Social Investment Programme Bill which he had since assented and for making further provisions for it in the 2020 budget “for the benefit of the poorest of the poor in our society.”

“It is a programme that will help the poorest of the poor and increase our GDP. We also intend to commence the School Feeding Programme this year. So many other programmes and projects have been captured in the budget to benefit the people. This is indeed a budget for the people of Kwara State,” the Governor added.

The Speaker of the State House of Assembly Salihu Danladi Yakubu said the budget was thoroughly scrutinised by the lawmakers before its passage on Wednesday.

“Members of the State Executive Council and other top government officials who spoke during the budget defence could testify to the fact that the 2020 budget was thoroughly scrutinised,” he said.

“It is a budget of reformation and reconstruction because there are critical sectors which were adequately provided for like water, health, education, agriculture, and works with very substantial capital votes. It is a budget of hope.”

Yakubu said the Assembly would carry out adequate oversight functions to ensure proper implementation of the budget.