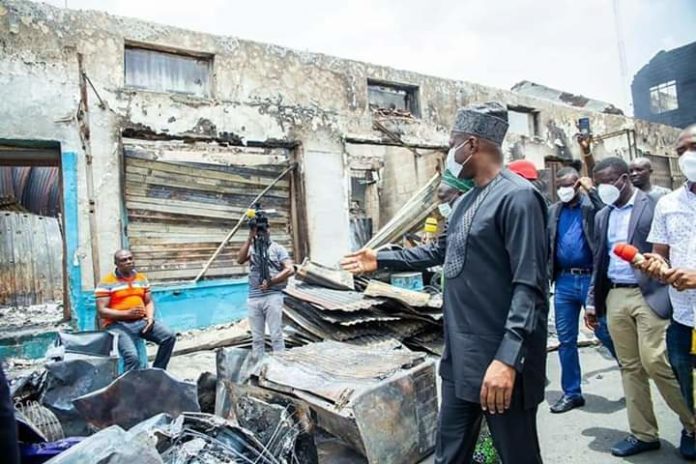 Oyo State governor, Engineer Seyi Makinde, on Thursday, visited the scene of the fire incident that razed some shops in Dugbe market, Ibadan, on Wednesday.

Governor Makinde, who was accompanied by a number of government officials, told the victims and a crowd of sympathisers, who had converged on the location to possibly salvage remnants of their wares, that the state government would launch an emergency fund to address disasters and emergencies.

A statement by the Chief Press Secretary to the governor, Mr. Taiwo Adisa, indicated that Makinde commiserated with the victims of the Dugbe inferno and promised to get to the roots of the incident.

The governor, who described the incident as unfortunate and heartbreaking, maintained that the State would find means, despite the challenges occasioned by the Covid-19 pandemic, to give palliatives to those that were affected by the inferno.

He, however, stated that there was the need for the State to have a Disaster Management Endowment Fund that will address such unforeseen contingencies.

He said: “I commiserate with the people that are affected. At such a time like this, this is the least of the things that we expect because we still are battling with COVID-19 and its social and economic impacts.

“So, we believe there is a need for the State to have an endowment fund for disasters. If such an endowment exists, right now, we would have given an immediate palliative to the people concerned.

“Meanwhile, we will try our best to see what we can do within the challenges we are facing.”

The governor said that at a time the State is still fighting to contain the COVID-19 pandemic, such an unfortunate occurrence like the Dugbe fire disaster was surely going to overstretch the state government.

He also admonished shop owners and residents of the State to always apply precautions and safety measures within their environments so as to avert unforeseen circumstances.