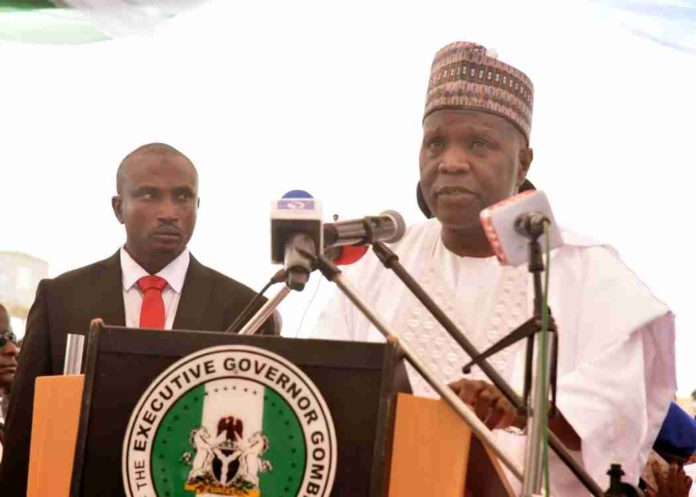 No fewer than 5,557 Internally Displaced Persons (IDPs), youths, women and other beneficiaries were on Monday presented with ATM cards, as Gombe State Governor Muhammadu Inuwa Yahaya flagged-off the payment of the Public Workfare (PWF) and Special Grant Transfers (SGT) of the Youth Employment and Social Support Operation (YESSO) in Akko and Billiri Local Government Areas (LGA) of the state.

According to the Governor, about 27,000 beneficiaries have been harvested from the World Bank assisted project which was recently aligned with the Gombe Goes Green (3G) project of the state.

The beneficiaries will be paid N7,500 as monthly stipends to nurture trees planted under the 3G project. Governor Yahaya stated at the flagging off that the 3G project is aimed at fighting climate change and to help in erosion control, among other economic and health benefits to the people.

He explained that having processed the payments of the beneficiaries of the project, which was launched in August, the government has decided to clear the backlog of the five months arrears.

“I am happy to announce to you all that will be receiving your ATM cards today that it will be coming with your five months salaries, that is N7500 times five, meaning you have N37,500 each to go and cash and have robust Christmas celebrations,” he said at the flagging off in Billiri LGA.

“I urge you to look after those trees not just because of what you have been given, but because these trees might be a source of income to each and every one of you and the state in general.”

“I am confident that if these trees are nurtured to grow, Gombe State will attract more benefits from international donor agencies, who would be coming to support us to do more,” the Governor said.

AbdulRazaq congratulates Prof Gambari on his appointment as Chief of Staff...