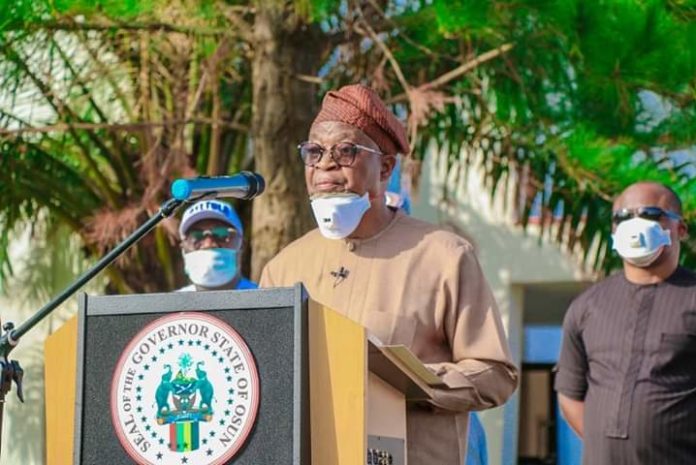 The Governor of the State of Osun, Mr Adegboyega Oyetola, has said that the proactive measures taken by the State Government by intercepting the returnees from Ivory Coast and immediately isolating them was for the greater good of other States and the nation at large.

He also announced the discharge of one of the cases, saying “on a happy note, it gives me great pleasure to announce that we are discharging one of our earliest cases from one of our facilities here in Osogbo, after testing negative twice in line with the prescribed protocol of the NCDC.”

Governor Oyetola, during a press briefing on Sunday in Osogbo further asserted that the 127 returnees from Ivory Coast comprises indigenes and residents of Oyo, Lagos, Ogun, Imo, Edo, Delta and Abia among other States.

Recall that the State Government of Osun had in the previous week received about 127 returnees from Ivory Coast, who came into the country through Ogun state border, where they were allowed entry and escorted by security officials from Ogun State to Osun, and immediately quarantined at the State’s isolation centre in Ejigbo.

Speaking on the identity and affiliations of the returnees, Governor Oyetola said: “We later discovered upon profiling that some of these returnees are indigenes and residents of other states such as Oyo, Lagos, Ogun, Imo, Edo, Delta and Abia among others.

“The effect of our intervention convinced us that we took the right decision, because if the returnees had been released into their various states, tracing them and their contacts would have been difficult and the implications would have been catastrophic for our State, those other states and indeed the entire nation”, he added.

Commenting on the results of the test for the coronavirus that was conducted on the returnees, Governor Oyetola affirmed that: “of the 127 isolated and tested returnees, 17 tested positive for the virus while 110 returned negative. Of the 17, we also have persons from other states.

“The 110 whose results came back negative have been released to join their families. Among them are: eleven to Oyo State, two are going to Lagos State, One to Ogun State, three each to Edo and Abia states, four to Delta State and one to Imo State while 85 will remain here in Osun”, he added.

Furthermore, the Governor noted that those who tested negative to the virus and released to join their families”have been advised to observe all the prescribed safety and preventive measures and to call our helplines if they start to feel unwell.”

“As we had earlier indicated in a press release, all the returnees who tested positive are intact at our facility and are undergoing adequate and proper treatment at our care centre and are all stable. We are hopeful that they will soon recover safely from the virus and rejoin their families”, the Governor added.

However, Governor Oyetola has called on the Federal government to assist the State of Osun in its effort to contain the further spread of Coronavirus in the State.

“Considering our perculiar circumstance, there is the urgent need for the Federal Government to assist us in our efforts to contain the spread of the virus.

“Our call is predicated on the fact that some of the samples that were tested indicated high level of viral loads, suggesting a strong capability to infect massively if necessary measures are not taken”, he added.