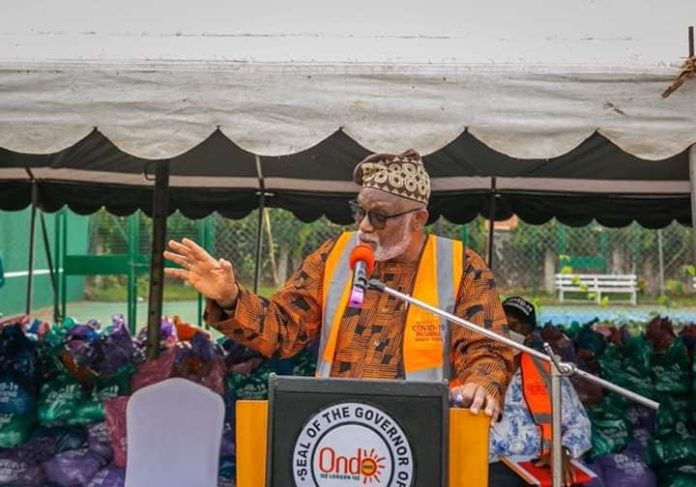 Ondo State Governor, Arakunrin Oluwarotimi Akeredolu, SAN, has flagged-off the distribution of the state’s palliative materials, as part of the efforts to cushion the effect of the CoronaVirus pandemic in the state.

Governor Akeredolu said the pallaitives are meant for everybody and not any party members, warning the committee members not to segregate while distributing the items.

According to the Governor, the idea of palliative became very neccessary since the Government has directed the people to stay at home as part of the precautionary measures to stem the spread of the Covid-19.

The Governor who spoke at the Government house, Alagbaka Akure on Saturday, April 11, 2020, said since the state has recorded its second index case, it has become more important to enforce all the directives the government had announced, adding that violators will be prosecuted from now on.

He said the movement of the items to the local government areas are already set, saying that was the reason the state chairman of the National Union of Road Transport Workers (NURTW) Jacob Idajo was put in the committee for easy transportation of the items.

Arakunrin Akeredolu thanked the UBA, WEMA Bank, First Bank, First Oil Limited, PMG and others for their donations towards the palliative.

COVID-19: Governor Wike declares compulsory use of face masks in the...