Home News Coronavirus: What we discussed with Buhari – Health Minister 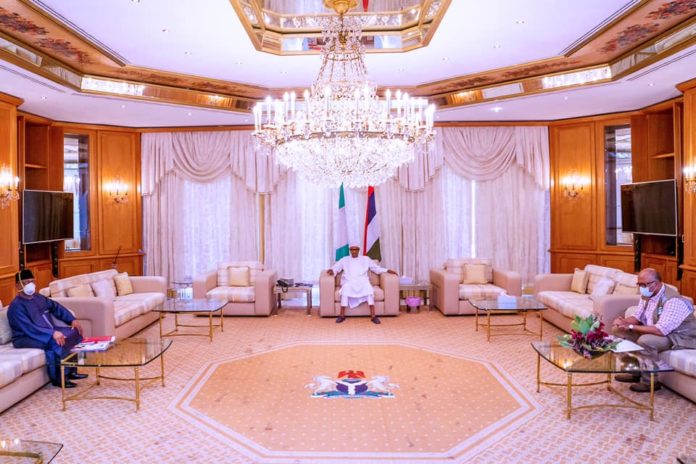 Nigerian health minister, Osagie Ehanire, has provided insight into why he, alongside other officials, visited President Muhammadu Buhari at the Presidential Villa in Abuja.

Mr Ehanire met with Mr Buhari on Saturday, alongside Chikwe Ihekweazu, director-general of the Nigeria Centre for Disease Control (NCDC), over the outbreak of the coronavirus pandemic in the country.

“It is to answer a few questions about what his Excellency heard about the health sector and the current coronavirus outbreak,” the health minister said while addressing journalists shortly after the meeting.

The official said he also explained what “we are doing to slow the spread of the virus, the problems presented by the situation and necessary measures to be taken in the coming days.”

A 29 minutes’ video showing the president with the two officials inside the villa was posted on the official twitter handle of the Nigerian presidency Saturday afternoon.

The trio sat in a triangular form at almost three yards away from each other, maintaining the ‘social distance’ protocol, one of the worldwide recommended safety tips for preventing coronavirus.

This is President Buhari’s first public appearance since his whereabouts became fuzzy following reports that his Chief of Staff, Abba Kyari tested positive to the virus after returning from Germany.

There were speculations that Messrs Buhari and Kyari were secretly flown out of the country to the United Kingdom for treatment.

The furore brewed more especially after Mr Buhari remained mum about 36 days after Nigeria reported its index case of covid19 on February 18.

Many Nigerians have criticised the president for not addressing them despite the increasing cases of the disease in the country, while leaders of African countries with far fewer cases are speaking up.

Nigeria, as of Saturday morning, has 81 cases of the virus caused by a disease now known as Covid-19. One death and three recoveries have been recorded so far.

Mr Buhari’s spokesperson, Femi Adesina, while speaking on a Channels Television programme on Thursday, however, said Mr Buhari’s silence is a ‘style’.

“It’s a matter of style,” Mr Adesina said, a statement that has since attracted more criticism from Nigerians.