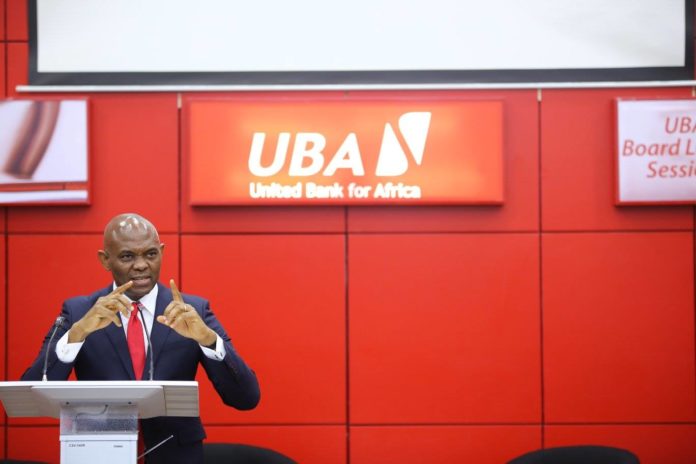 United Bank for Africa (UBA) Plc on Monday awarded millions of Naira as education grants to winners of its annual national essay competition.

A 14 year-old student of Louisville Girls High School, Ogun State, Miss Oluwatoroti Jolaosho emerged the overall winner of the 2019 edition of the UBA Foundation National Essay Competition, winning the grand prize of an educational grant of N2 million to study in any African university of her choice.

Jolaosho clinched the first position at the grand finale of the competition which was held yesterday at the UBA Head Office, Marina Lagos. Her essay was declared the best out of over 5000 entries received by the UBA Foundation from students of senior secondary schools across Nigeria.

This year’s NEC had12 finalists made up of eight girls and four boys with over 500 per cent increase in participation from pupils across every single state of the federation.

Jolaosho who was visibly elated expressed her profound excitement as the winner of the competition, adding that the experience has given her more confidence with which she can face great challenges in the years ahead. She noted that the grant will help in the pursuit of her dream towards becoming a pediatrician.

“This is something I worked very hard to achieve. I read and studied very hard for this competition, and I am very happy that my hard work paid off in the end. I am indeed very grateful to UBA and the UBA Foundation for this huge opportunity and for making me believe in myself, and I would like to encourage other students not to stop trying,” Jolaosho said.

Her mother, Mrs Jaiyeola Jolaosho, said, “This grant will go a long way to support my bid for quality education for Oluwatoroti. Now our dream to give her an education at the African Leadership Academy will be fulfilled with this grant. I am so happy about this, because I noticed that she has a penchant for writing, and we are so elated that she won. I will encourage all her siblings to apply for for this competition going forward.”

This year, the Foundation introduced a prize for the school with the highest number of essay entries and the Livingstone College, Lagos came tops. They will be receiving gifts worth over N1m from the UBA Foundation for their participation in the competition.

Congratulating the winners at the event, Managing Director, UBA Foundation, Bola Atta, commended them for their exceptional brilliance. “Every student who sent in an entry is a winner. To be confident about your writing skills and ambitious enough to enter a competition to further enhance your educational path is laudable. For those that did not win, I would say do not be discouraged. Take it as a challenge to perfect your writing skills and enter for the competition again in 2020,” Atta said.

According to her, UBA Foundation, being the CSR arm of UBA Plc, makes it a point of duty to give back to communities where UBA operates. Education in any capacity, Atta noted, remains the Foundation’s focus area as it is the bedrock of any nation.

In his remarks, Managing Director, United Bank for Africa (UBA) Plc Mr. Kennedy Uzoka said UBA was very happy to be touching lives and making a solid impact through its Foundation’s National Essay Competition and the grant it gives out annually to those who emerge winners. He specifically commended the fact that more females emerged winners this year, adding that it is in line with the bank’s commitment to women empowerment.

Uzoka who is also the Chairman, UBA Foundation said, “What we are doing today in unique in Africa, we are doing this to continue to encourage our young ones to study hard because we noticed that overtime, the level of education has been going Southward. For 9 years now, we have been supporting students with grants to further their educational pursuits’.

Uzoka informed the gathering made up of parents, students and the media, that the essay competition has produced well over 100 winners, since its inception in 2011 in Nigeria – many have already graduated, and a few are studying varied courses at Universities in Nigeria and across the African continent.

He encouraged the winners to be of good character, and ensure that apart from striving for academic excellence, to avoid any negative action that might dent the foundation’s image and that of their families as they are now UBA ambassadors.

The judges, led by Professor of English (Gender Studies) and Director of Pre-degree Studies, University of Uyo, Mrs. Ini Uko, stated that they were impressed with the participants who showed great promise, noting that most of the students wrote intelligently and their ideas were well articulated, new and refreshing. She added that the judges were also encouraged by the fact that entries came in from students from all parts of the country.

The UBA Foundation’s National Essay Competition initiative has been operational in other countries in Africa including Ghana and Senegal whilst Mozambique and Kenya are expected to kick off in 2020. The initiative .is mapped out to spread to more African countries in the very near future.