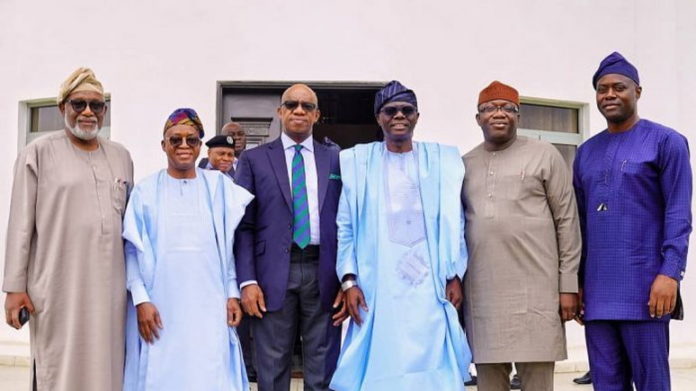 All is set for the commencement of Operation Amotekun, the Western Nigeria Security Network (WNSN).

The legal hurdle which is delaying its take-off will be cleared this week.

Houses of Assembly in the six states – Lagos, Ogun, Oyo, Osun, Ondo and Ekiti – are expected to pass the regional security outfit’s operational bill for the governors to give assent on Friday.

Ekiti State Governor Kayode Fayemi on Monday announced the decision of the governors to make the outfit operational, when he received the bill’s draft from Attorney-General and Commissioner for Justice Olawale Fapounda (SAN).

Operation Amotekun was launched by the governors on January 9 in Ibadan but Attorney-General of the Federation and Minister for Justice Abubakar Malami, declared the outfit illegal.

He said the Constitution has no room for a regional security outfit. He also said security is on the Exclusive list.

But the governors insisted that it was the only way for them to protect their people from kidnapping for ransom and other violent crimes.

Following Vice President Yemi Osinbajo’s intervention on behalf of President Muhammadu Buhari, it was agreed that each of the states should legalise the security outfit.

Consequently, attorneys-general in the six states met to draft a bill while the speakers of Houses of Assembly agreed to give the bill accelerated passage.

Fayemi said yesterday: “My colleagues and I were still in discussion about this yesterday (on Sunday) and we have promised ourselves that this will be given accelerated discussion in our various state executive councils this week and we also send it expeditiously to our various houses of assembly this week. Our discussions with our speakers who had been really waiting for this, some of them had been recalling other honourable members from recess in order to give this an accelerated passage in their various legislature, so that by Friday the 14th of February, the bill that hopefully would have been passed would be assented to simultaneously in the six states of the Southwest.”

The bill will be considered on the floor of the Oyo State House of Assembly today, Chairman, House Committee on Information, Kazeem Olayanju.

He said: “The House will sit tomorrow (today). We are not on recess. I can confirm to you that the bill on Amotekun will be received tomorrow. It could be considered for first reading by Thursday.”

The Lagos State House of Assembly said it is awaiting the Bill from the Attorney-General’s office. A principal officer gave the assurance that it will be given expeditions consideration.

Osun State Governor Adegboyega Oyetola said on Monday that the bill will go to the House of Assembly this week.”

Speaking through his Chief Press Secretary, Ismail Omipidan, he added: “I want to make it abundantly clear that Amotekun has nothing to do with religion. It has no religious colouration. Those who are insinuating that it is aimed at elevating one religion over the other are probably being misinformed about the origin of Amotekun. Crime, rape, banditry have no religion and tribe.”

He said the recruitment for the outfit in the state will be done at the local government level.

“The local governments in the state will be responsible for the recruitment of the personnel that will form the bulk of the security outfit.

“The chairman and the traditional rulers know the people in their domain to be recruited into the outfit and I believe that none of them will deliberately compromise the security of their people.”

He implored citizens to be assured that his government is for everybody and will not do anything to undermine the peaceful coexistence in the state.

Oyo State Attorney General and Commissioner for Justice Gbolahan Adeniran said the Bill is expected to be presented at the Executive Council meeting today for approval and transmission to the House of Assembly.

Fapounda said the content of the bill would be put on Ekiti State House of Assembly Ministry of Justice website for those who have observations to make their views known.

According to him, the Amotekun bill has 38 provisions “painstakingly prepared”, with specifications for each of the states which outline the operational guidelines.

The key provisions in the bill include its functions and objectives, the creation and the composition of the governing board for the agency, establishment of Amotekun corps including its powers, criteria for enlistment into the corps, and several other needs.

There is also provision for independent Amotekun corps complaints board. The purpose of the board is to provide an opportunity for our people to report instances or possible cases of abuse of power including violation of rights and corruption. There is also provisions on the funding of the corps to ensure sustainability.

“A lot of people have misconstrued the essence of the Amotekun security network. It is not about an exclusive protection of indigene of the Southwest. It is about safety and security of every person resident in the six states of the Southwest, regardless of where they might have come from. As long as there are legitimately and legally resident in every part of the states, we consider it our duty, we consider it our responsibility to protect them.

The bill is going to talk on ensuring our highways are free from banditry, armed robberies, kidnappers and all forms of brigandage.

“To that extent, it is a logical extension of the community policing initiative that President Muhammadu Buhari has assented to, that the Inspector General of Police has already communicated to various police formations across the country.”

Why I Chose Shettima As Running Mate — Tinubu