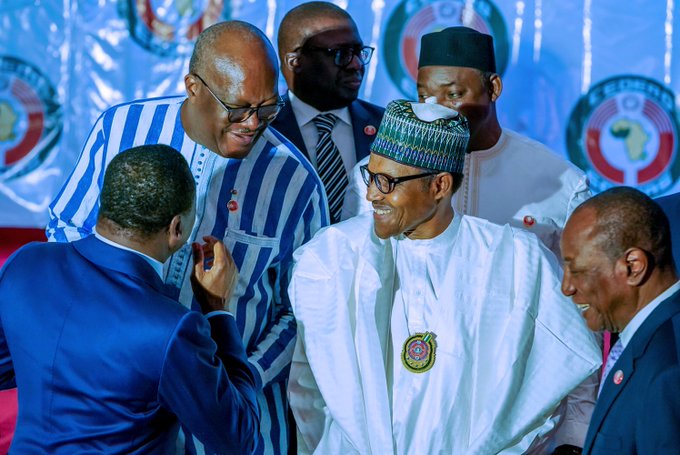 President Muhammadu Buhari has assured Burkina Faso of Nigeria’s and other West African countries’ solidarity after it was attacked by suspected terrorists.

Burkina Faso, on Tuesday, suffered a devastating attack, to which it lost 35 of its citizens.

Seven soldiers and 80 armed fighters were also killed in Tuesday’s double attack on a military base and Arbinda town in Soum province, in the country’s north, according to the military.

The President, in a statement by his Senior Special Assistant on Media and Publicity, Mallam Garba Shehu, said the country would not be abandoned to its fate.

Speaking on the attack carried out in Arbinda, northern part of the country, Buhari said the slaying of 31 women among the innocent victims was cowardly and remains condemned by reasonable opinion all over the world.

He noted his meeting last weekend with the country’s President, Roch Marc Christian Kabore, on the sidelines of the ECOWAS meeting, at which both leaders agreed to hold a summit in the new year to discuss the issues of security and economy.

“I look forward to that meeting,” said the President, assuring that “as we have done all the time, we will stand with our brothers and sisters in West Africa in all situations.”

Buhari hailed the Burkinabe troops for repelling the deadly attack and prayed for the repose of the souls of those killed.

Burkina Faso, bordering Mali and Niger, has seen regular attacks – hundreds have been killed since the start of 2015 when violence began to spread across the Sahel region.

“A large group of terrorists simultaneously attacked the military base and the civilian population in Arbinda,” the army chief of staff said in a statement.

“The heroic action of our soldiers has made it possible to neutralise 80 terrorists,” Kabore said.

Islam is the dominant religion in Burkina Faso, a country of about 20 million people, but there is a sizeable Christian minority of about 20 per cent.

The president has declared 48 hours of national mourning.

The morning raid was carried out by dozens of fighters on motorbikes and lasted several hours before troops, backed by the air force, drove the attackers back, the army said.

No group immediately claimed responsibility for the attack, but previous violence in Burkina Faso has been blamed on fighters linked to al-Qaeda.