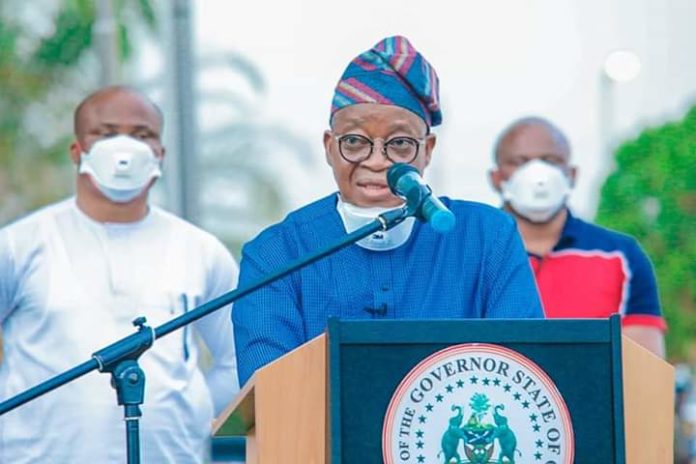 The Osun State Government has discharged 10 Coronavirus patients from its health facility at Ejigbo, having tested negative twice for the virus.

The State Governor, Mr Adegboyega Oyetola, who disclosed this at a press briefing on Saturday in Osogbo, said the 10 patients had tested negative twice for the virus in line with the National Centre for Disease Control, NCDC protocol, and have been released to reconnect with their families.

According to the governor, the 10 patients are among the 17 Ivory Coast returnees that were earlier tested positive. He added that the remaining 7 patients were responding to treatment, and expressed optimism that they will soon recover and be released to join their families.

Oyetola said the release of the 10 patients would bring to 11, the number of cases that have tested negative twice in the State.

It would be recalled that of the two earlier COVID-19 cases in the State, one had tested negative and had since been discharged.

The governor noted that “this development underscores our belief that COVID-19 isn’t a death sentence, but is treatable if the patients surrender themselves for treatment on time.”

He added that the discharge of 11 patients was a confirmation to the fact that the state has the right equipment and personnel to handle the Coronavirus pandemic.

Oyetola expressed delight on the success recorded so far, “saying the successful treatments should also encourage persons who are feeling unwell to come out for testing and treatment if found positive.”

The Governor thanked residents of the State for their understanding and for complying with the directive given by the government, while urging them to continue to obey the regulations to avert community transmission.

“We thank our people for their understanding and for complying with the directives imposed by government and the relevant agencies. We urge them all to continue to obey the regulations to avert community transmission,” he stated.

Malami Has Not Resigned As Minister, Says Spokesman

Kwara alleges plots to cause civil unrest over COVID-19 lockdown