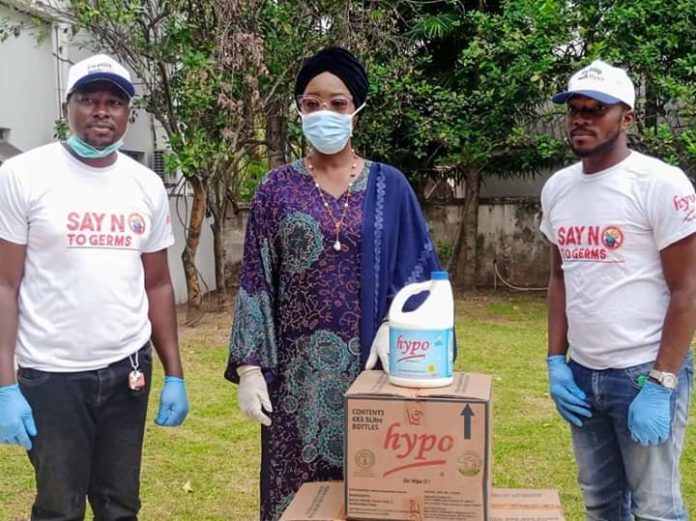 The first lady of kwara state Dr Mrs Olufolake Abdulrazaq has donated disinfectants to the two isolation centers in the state.

The first lady who is also the founder of Ajike people’s support center also donated disinfectants to the general hospital ilorin to promote hygiene in these facilities especially in this time of the COVID-19 pandemic.

Presenting the items onbehalf of the first lady, the director of protocol Mr Raphael Hassan stated that the First Lady understands the need for health workers to be well protected in this time of the outbreak of the virus hence the presentation of these items.

Mr Hassan also used the event to thank DUFIL prima industries on behalf of her excellency for making the donation of the cartons of hypo to her.

While receiving the items on behalf of the infectious diseases treatment center, Sobi specialist hospital, ilorin, Dr. Adeniyi commended the gesture of the first lady in the fight against the virus.

On his part Dr. Alaofin who received the donation on behalf of general hospital ilorin appreciates the first lady for the donation, adding that it would go a long way in assisting health workers in the course of their duties.

It would be recalled that the first lady on Tuesday 7th of April in a related development donated personal protective equipments to general hospitals across the state to mark the world health day.

In complimenting Government’s effort at curbing the spread of the novel Corona virus, Dr. Mrs Abdulrazaq urged all kwara residents to abide by all the precautionary measures earlier announced by the Ajike people support centre such as; washing of hands, social distancing, disinfecting of surfaces, use of hand gloves and nose masks and as well adhere to advisories by other Government agencies.