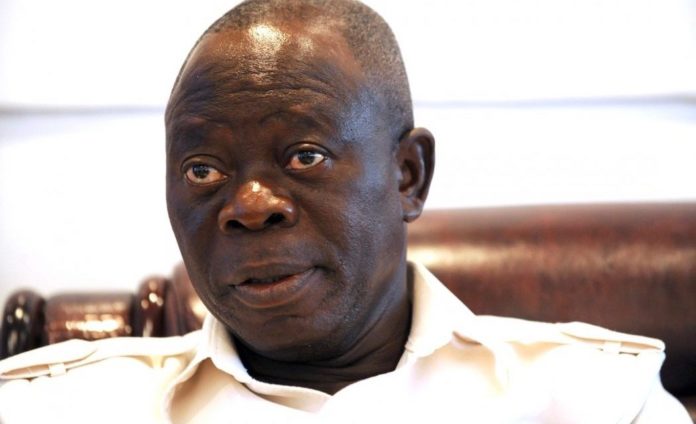 A chieftain of the All Progressives Congress in Edo State, Mr Charles Idahosa, on Monday called for the resignation of the party’s National Chairman, Adams Oshiomhole.

Addressing journalists in Benin, Idahosa who was the Special Adviser to Oshiomhole during his eight years as the state governor, said resignation was the only honourable option for the former governor since he had been suspended from his ward, local government and the state chapter of the party.

He said, “From the way we are seeing issues under Adams Oshiomhole, the APC is dying gradually. It is now time for Oshiomhole to step aside and let peace reign in the state.

“The fight we have in Edo State is a battle of supremacy between the national chairman of the party and Governor Godwin Obaseki. How is he going to sit over his matter? He cannot set up a committee to sit over a case he is involved.

“The national chairman is the problem. We don’t want bloodshed in Edo. Let him resign and there will be fresh elections. He is playing divisive role because he wants to be dictating what happens in this state. It is time for him to step aside.

“At the last meeting he held with the chairmen, the President said we must approach our politics from bottom up. Any leader that does not have support of the home base is not fit to hold any office in Abuja.

“Buhari was talking to Oshiomhole. Oshiomhole presently has no home base. He has been suspended by his ward, the LGA and the state chapter. The only way out for him is to tender his resignation. Those people that signed the suspension order are still alive.”

Idahosa said as the Special Adviser to Oshiomhole on Politics for eight years, he is in the best position to advise the national chairman on the crises in the state.

“Oshiomhole knows me, I am not afraid of anybody and I am not afraid of telling him the truth. This is not how we started and we cannot continue to remain like this. Others can keep quiet but I cannot, because I am a stakeholder in this state,” he said.

On the rumour that the state governor, Godwin Obaseki, was planning to dump the APC for the Peoples Democratic Party to pursue his second term ambition, Idahosa said, “It is a black lie to say that the governor is leaving the party for another. Governor Obaseki is not leaving the APC for anybody.”

Oshiomhole’s spokesman, Simon Ebegbulem, could not be reached for comments but one of the lawmakers-elect, whose seat was recently declared vacant, Washington Osifo, said Idahosa does not play politics of ideology.

He said, “It is laughable for Idahosa to be calling for the resignation of our national chairman. He does not play politics based on ideology or principles; he plays his politics on who is bringing the money.

“He is saying this because of what he is making from the current system. Oshiomhole has come to reposition our great party.”

We are working in defence of public interest in Oyo –...