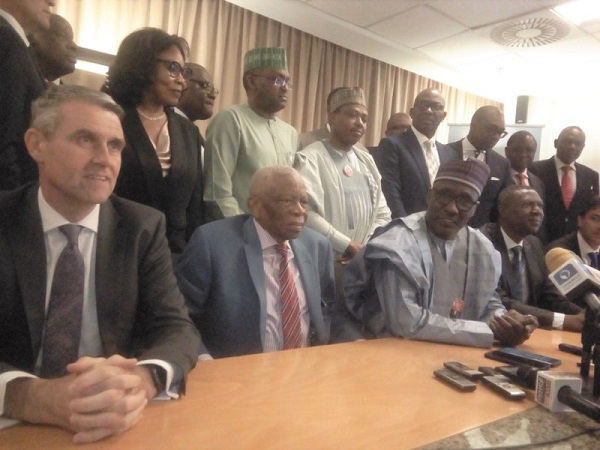 The Nigerian National Petroleum Corporation (NNPC), Shell, Total, and ENI on Friday signed the final investment decision (FID) to give the go-ahead for the construction of Train 7 of the Nigeria Liquefied Natural Gas (NLNG) project.

The FID was initially scheduled to be sealed last week Thursday. But, after two days of meetings meant to smoothen the rough edges and come to the decision, the parties agreed to extend the ceremony.

But, at a small ceremony witnessed by representatives of all the partners in the NLNG office in Abuja, the FID was finally taken on the commencement of the project that will expand the plant’s production capacity by 35 per cent and boost Nigeria’s competitiveness in the global LNG market.

“The FID will allow the expansion to increase the capacity of NLNG’s six-train plant from the extant 22 million tonnes per annum (MTPA) to 30 MTPA,” the Managing Director/CEO of NLNG, Tony Attah, said at the signing ceremony.

“Train 7 is the crux of a growth agenda, which will ensure the Company’s position as the 5th major supplier of global LNG is maintained, increasing value to its shareholders and other stakeholders, as well as further reducing the gas that would otherwise have been flared, in fulfillment of its vision of ‘being a global company, helping to build a better Nigeria.

“With the award of contracts for the engineering, procurement and construction activities to follow the closure of the bank and Export Credit Agency (ECA) financing, and the finalization of some key supporting commercial agreements is expected in early 2020,” he added.

He said the actualization of the Train 7 Project comes as NLNG celebrates 30 years of its incorporation and 20 years of safe and reliable operations since exporting its first LNG cargo in 1999.

Also, he said the project will help create “over 12, 000 jobs will be created during the peak of construction, trade and commercial activities within the Niger Delta region equally receiving a boost as a result.

“The Project will also support the development of local engineering and fabrication capacity in the country. Other opportunities for local content include procurement, logistics, equipment leasing, insurance, hotels, office supplies, aviation, haulage, and many more,” Mr Attah said

The Group Managing Director of NNPC, Mele Kyari, said the taking of the FID marks a great day for Nigeria as all the partners in the project have resolved to proceed with a project that will ultimately deliver at least $20 billion of net revenue per annum for the federation and create at 12,000 direct and 40,000 indirect jobs to Nigerians.

“The significance of the FID is that there is renewed confidence by international investors, particularly the partners in the project, which have been in the country for long, to still agree to bring money back into this economy to move Nigeria and our relationship forward.

“It is a show of confidence in the strength of the Nigerian economy and the capacity of President Muhammadu Buhari to bring value to the country’s economy and create the environment to attract more foreign investment.”

For NNPC, he said it is convinced that doing things right and transparently and with accountability to its shareholders, including over 200 million Nigerians, is the way forward to create value, prosperity and employment for the economy.

He said the FID on NLNG Train 7 has opened a gateway for great things in the economy in the immediate future, adding that with NNPC and its partners they are committed to working together to bring more projects in the upstream sector of the oil and gas sector.

“Despite all the challenges, we are able to come together to make the decision to invest in this project. We are very proud to be Nigerian today. We know that this is delayed. But we are confident that it will work. Mr President’s directive is that we should take it to Train 12.

“We are all committed to doing everything to take the next steps so that we can make further progress to realize Trains 8, 9, 10, 11 up to 12 as soon as possible. There is opportunity for this. There is a will to go ahead with this,” Mr Kyari said.

Representatives of Shell, Henry Bristol; Total (Peter Costella) and ENI (Alessandro Tuiani) all pledged their continued support and partnership to realise the objectives of the project.

The construction period after FID will last approximately five years with the first LNG rundown expected in 2024.

Upon completion, the NLNG Train 7 will support Nigeria’s drive to diversify its revenue portfolio and generate more revenue from its proven gas reserves of about 200 Trillion Cubic Feet (Tcf).

Ekiti Cargo Airport to be delivered before I leave office –...