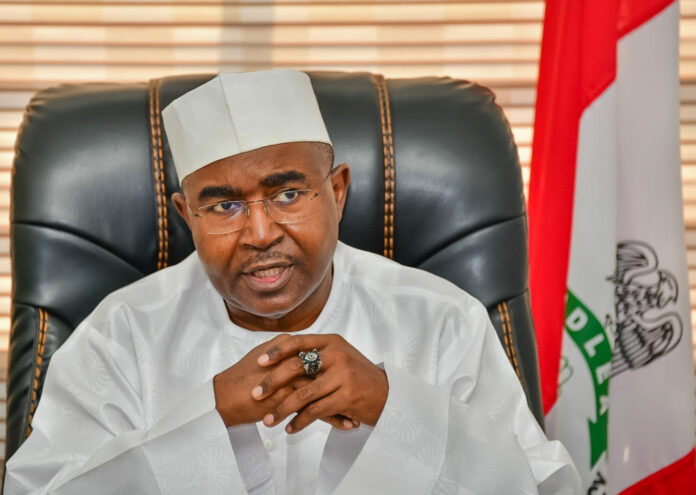 Operatives of the National Drug Law Enforcement Agency, NDLEA, at the weekend disrupted the activities of a major cocaine syndicate in Lagos following the arrest of a 56-year-old trafficker, Lawal Lateef Oyenuga who was on a mission to deliver 400grams of the class A drug concealed in a pair of palm sandals in Jeddah, Saudi Arabia and the swift follow up arrest of a wanted notorious kingpin, Wasiu Sanni Gbolahan popularly known as Teacher, who recruits mules for the cartel.

NDLEA operatives attached to the screening point of the Murtala Muhammed International Airport, Ikeja, Lagos had on Thursday 24th November intercepted Lawal Lateef Oyenuga with a pair of black palm sandals packed in the luggage he was going with to Jeddah, Saudi Arabia via Addis Ababa on an Ethiopian Airways flight.

A thorough examination of the sandals revealed they were used to conceal two parcels of cocaine weighing 400 grams. This is barely a week after a 56-year-old widow and mother of four, Mrs. Ajisegiri Kehinde Sidika was arrested at the airport over her attempt to traffic 400 grams of cocaine concealed in her footwear to Makkah, Saudi Arabia on board a Qatar Airways flight.

In his statement, Oyenuga claimed he was recruited to traffic the drug by Wasiu Sanni Gbolahan popularly known as Teacher, adding that he was first given some pellets of cocaine to swallow but when he couldnt do that, then he was given the ones concealed in the palm sandals. He said he resorted to the criminal trade to raise money to pay an examination fee for his daughter who is in Senior Secondary School class 3.

The Agencys database reveals Wasiu Sanni (Teacher) has been linked to some previous attempts to traffic cocaine to Saudi Arabia and Dubai, UAE. He was earlier named as the one who recruited a BRT driver, Bolajoko Muyiwa Babalola for Lagos socialite and owner of Adekaz Hotels, Alhaji Ademola Afolabi Kazeem (a.k.a Alhaji Abdallah Kazeem Muhammed) to traffic drugs to Dubai. Bolajoko was arrested on 27th June while taking 900 grams of cocaine to Dubai while Ademola Kazeem was nabbed on Thursday 10th November, barely 10 days after he was declared wanted by NDLEA.

A follow up operation in the early hours of Friday 25th November led to the arrest of the kingpin, Teacher, who specialises in recruiting mules for drug barons in Lagos and its environs at his residence located in Ikorodu area of Lagos. The 64-year-old Wasiu Sanni Gbolahan is a housing and property agent, with seven children and four wives, one of whom is now late.

In another follow up operation to the seizure of 1.10kg cannabis concealed in bottles of body cream going to Dubai on 9th September, the actual owner of the consignment, Wordu Hopewell Chukwuemeka who runs a boutique business in Port Harcourt, Rivers state was arrested in the Garden City on Thursday 24th Nov.

In the same vein, operatives attached to NAHCO import shed of the Lagos airport on Tuesday 22nd Nov. intercepted a consolidated cargo from Johannesburg, South Africa via an Airpeace Airline flight. The cargo contained different items, including cloths, cereals, baby toys, drinks, and a set of two big black speakers, which were used to conceal 25 parcels of Loud variant of cannabis, with a gross weight of 5.5kg.

Similarly, operatives attached to the SAHCO export shed of the airport same Tuesday intercepted a carton of food items used to conceal 500 grams of cannabis going to Dubai, UAE while the owner, Uzoma Kingsley was promptly arrested.

In a related development, attempt by an Organised Criminal Group to traffic 131kg of Ephedrine, a dominant precursor chemical for the production of Methamphetamine to Congo Kinshasa through the SAHCO export shed of the airport was foiled on Monday 21st Nov by NDLEA operatives in conjunction with Aviation Security (AVSEC) officers of the Federal Airport Authority of Nigeria (FAAN). Two freight agents: Nwazuru Georgewill and Saheed Muritala linked to the bid were promptly arrested.

Meanwhile, attempt by a drug trafficker, Udogwu James Johnson, facing multiple charges of drug offences to flee the country after he jumped bail has been thwarted by NDLEA operatives at the Port Harcourt International Airport where he was arrested on Friday 25th Nov. The 51-year-old suspect was already facing trial at a Federal High Court in Lagos before he was arrested again on Saturday 9th April in Port Harcourt for importing 5.48kg cocaine concealed in lotion plastic bottles sealed with candle wax. He was granted bail by a Federal High Court in Port Harcourt on Wednesday 23rd Nov over his latest offence while the Lagos court had issued a warrant of arrest against him for jumping bail over his case in Lagos.

At the Nnamdi Azikiwe International Airport, NAIA, Abuja, the move by a Brazilian returnee, Iroegbute Ejike Francis, 46, to smuggle 4kg cocaine soaked in towels stuffed in his hand luggage into the country was foiled on Thursday 24th Nov by NDLEA officers who arrested him, upon his arrival on a Qatar Airline flight from Brazil -Doha-Abuja.

No fewer than 5,851.3 kilograms (5.8 tons) of cannabis sativa were seized from dealers across five states in the past week, including a notorious cripple, Ibrahim Yusuf, 45, who was arrested on Monday 21st Nov. at Gasline, Ifo, Ogun state with 4kg of the psychotropic substance, while a total of 36 bags weighing 570kg of the same substance were recovered in another raid at a forest in Ogunmakin town, Obafemi Owode LGA.

This was also followed by another seizure of 45 bags that weighed 529.5kg, while officers equally intercepted a Toyota Sienna bus with Reg. No. BDG 598 FZ (Lagos) loaded with 566.5kg cannabis going to Onitsha, Anambra State, and a suspect, Sunday Mathias, 30, arrested with the seizure.

In Ondo state, NDLEA operatives stormed Oke-Ogun forest on Friday 25th Nov where Onyebuchi Chime was arrested with 88kg cannabis, a gun and some ammunition while they also recovered 149.5kg of the substance at Ipele forest. Not less than 12.42 hectares of cannabis farms were destroyed and 195kg processed weeds of the substance recovered at Efon Alaye, Ekiti state where two dealers: Richard Ebong and Nze Abraham were arrested on Saturday 26th Nov.

In Oyo state, operatives arrested a 27-year-old Mrs. Adebayo Rahmat on Thursday 24th Nov at Sabo-Ilupeju, Atiba LGA, with 136.3kg cannabis, while no fewer than 84,000 pills of Tramadol tablets were recovered from a suspect, Muhsin Abdullahi in Bodinga area of Sokoto state same day. In the same vein, 16,000 pills of Exol-5 and D5 concealed in palm oil were seized from Lawal Rabe, 24, on Friday 25th Nov at Kokami village, Danta LGA, Katsina while a total of 54,500 tablets of Tramadol and Exol-5 were seized from the duo of Basiru Muhammadu and Saidu Yusuf in the same area on Saturday 26th Nov.

Chairman/Chief Executive of NDLEA, Brig. Gen. Mohamed Buba Marwa (Retd), CON, OFR, commended the officers and men of the MMIA, NAIA, PHIA, Edo, Ogun, Ekiti, Ondo, Sokoto, Katsina and Oyo Commands of the Agency for their professionalism in the discharge of their duties and the remarkable results that followed. He enjoined them and their compatriots across the country not to let down their guards as the nation approaches the festive season.

Eid-El-Kabir: We Must Stand Against Terror Acts, Embrace Peace, Justice –...

United Nigeria can only thrive on political stability, social security –...