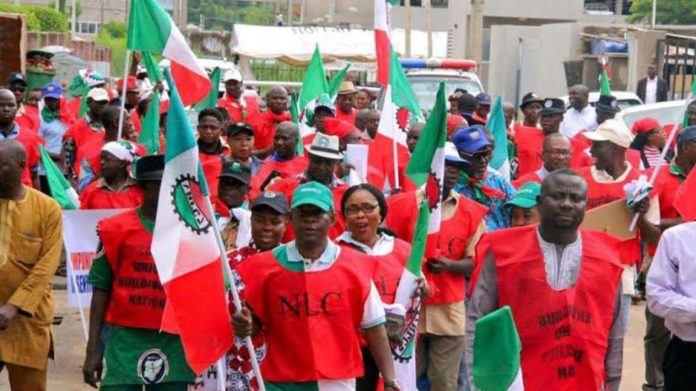 Labour talked tough on Monday over the implementation of the N30,000 minimum wage in states.

It spoke of plans to declare trade dispute with three states – Cross River, Kogi and Taraba – for failing to initiate talks with workers’ representatives on the implementation of the new wage.

According to him, the remaining 23 states took advantage of the December 31 deadline to open talks with unions on the minimum wage payment and the consequential adjustment on senior civil servants’ salaries.

Wabba, who spoke on a Channels Television programme, categorised the 36 states into three.

He said workers in Lagos and Kaduna have joined their colleagues on the federal government payroll in enjoying the new minimum wage.

Wabba listed the states where discussions on consequential adjustments have been concluded as Adamawa, Bauchi, Borno, Jigawa, , Kano, Katsina, Kebbi, and Ebonyi.

Wabba said about 23 states were still on the discussion table with labour leaders in their states on consequential adjustments.

According to Wabba, the new wage is binding on all states following President Buhari’s assent.

He said: “We are actually on track. The Federal Government has set the pace. They have been able to meet up with all the obligations, including payment of arrears. Let us also not lose sight of the fact that from the day the President assented to the bill, it became law. Therefore, states have no reason not to respect a law that was enacted.

“That is why the unions are interested in looking at the details before they sign. Some (states) will want to pay peanut and that is what we are trying to avoid.”

Wabba said the leadership of the NLC would meet with those of the Trade Union Congress and the Joint Public Service Negotiating Council (JPSNC) to review the situation state by state and take action.

“We have three states that are yet to commence anything. We have Cross River, Kogi and Taraba state. These states are yet to even constitute the negotiating committee and these three states have not shown enough commitment to actually start the process of negotiating and implementing the minimum wage.

“We will engage them but certainly there must be a time to conclude all those processes. Because when we allow the arrears to accumulate then it becomes compounded.

“Certainly, we are not going to set another deadline. That will be on the basis of specific request from states but the deadline we have set for December 31, 2019 certainly stands.

“If need be in a particular state where government remains adamant, workers will have no option than to go on strike because workers are not slaves. That is the only instrument that we have which is recognised by law.

“Our structures will have to meet within the week – the NLC leadership, the TUC (Trade Union Congress) and the JPSNC (Joint Negotiating Council). We will review the situation state by state and where we need to send in intervention, we will send intervention from the leadership and where we need to take some action we will also make sure that workers’ interest are not undermined,” he added.

In Ado-Ekiti, the local chapter of the NLC appealed to Governor Kayode Fayemi to expedite action on the completion of negotiation on the consequential adjustment.

Commissioner of Information and Communication Dan Manjang told the News Agency of Nigeria (NAN) in Jos said significant progress was being made in its negotiations with labour unions for the implementation of the minimum wage.

He said: “We first began the process by setting up a committee led by Mr Luka Fwangyil, a former Head of Service, to negotiate with labour on the consequential adjustments as directed by the Federal Government based on the peculiarity, sustainability and capacity of each state.

“Today (yesterday), I will be proud to tell you that that singular step we took is paying, as things are going smoothly toward us agreeing on what to pay our most cherished workers.

NLC Ekiti State chapter Chairman Kolapo Olatunde said the implementation of the national template on the consequential adjustment should be priority of the government.

Chief Press Secretary to the governor Yinka Oyebode said the government had since October last year commenced payment of the minimum wage to lower level workers in the state.

Oyebode said: “Don’t forget we have commenced payment for workers in that category since October but the consequential adjustment being demanded by labour is the one remaining. However, discussions have reached advanced stage with labour in this regard and very soon everything will be resolved.”

Head of Information Unit at the Labour House, Mr. Benson Ukpah, said no date has been fixed for industrial action.

“We have not issued a notice yet. As soon as we issue a notice we will let you know,” Ukpah said.

The three major organs of the TUC are meeting tomorrow and Thursday to review the implementation of the new minimum wage in the states.

Olaleye said: “The TUC has called for a meeting to review the process and decide the next line of action.”

Okowa Will Neither Help Nor Hurt Atiku – Farooq Kperogi