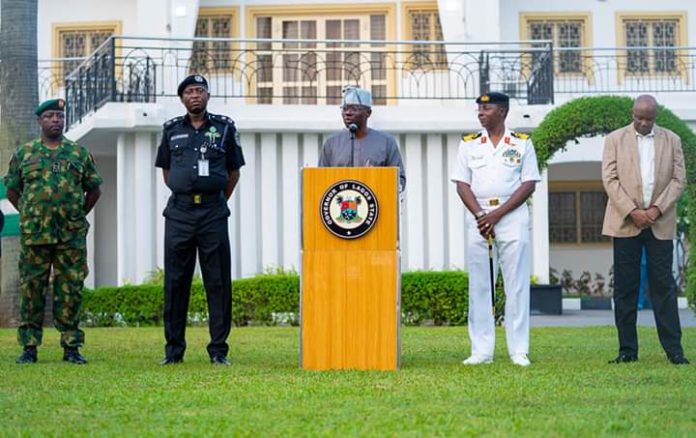 The Governor urged those who will be carrying out the enforcement to show high professionalism in dealing with erring persons, cautioning that high-handedness may lead to violation of human rights of residents.

Sanwo-Olu gave the charge on Monday in a discussion with commanders of all security formations in the State during a Security Council meeting held at the State House in Marina.

President Buhari announced 14-day cessation of movement in Lagos, Federal Capital Territory (FCT) and Ogun State as part of the steps to break the cycle of the spread of the novel Coronavirus (COVID-19) in the country. Lagos is the worst hit among the three states locked down by the Federal Government.

Briefing the press after the meeting, Commissioner of Police, Hakeem Odumosu, who spoke on behalf of the Council, said the presidential directive would be fully implemented, stressing that commanders of each security agency had resolved to comply with the Governor’s entreaty.

He said the enforcement of the restriction order would be executed with human face, but pleaded with residents and inter-state commuters to exercise self-compliance with the presidential directive.

He said: “We have just concluded a Security Council meeting with Governor Babajide Sanwo-Olu and as commanders of security agencies in Lagos, we have fully digested the presidential directive on COVID-19. We have all resolved now to comply and enforce all the restrictions.

“The enforcement of the restrictions and all directives will be done with human face. We want to appeal to members of the public; what matters most is self compliant. They must try as much as possible to comply voluntarily to the laid down regulations, so that we can collectively defeat the pandemic.”

The Lagos police boss said those who had been exempted in the presidential directive would be allowed to move unhindered at any time of the day in the containment period, but added that the exemption was not blanket.

Odumosu said some other professionals and government officials on essential duties would be allowed to move, but said their leadership must obtain clearance from security agencies before sending out staff to work.

He said: “The exemption is not blanket. Some other measurements will still be attached to it and sent to various government ministries in the state. The Commissioners in charge of these ministries will have review and confirm those who are exempted are actually qualified to be exempted.”

Windfall for Ogun workers on May Day, as Abiodun commits to...

2022: US expresses readiness to partner Osun for credible guber poll