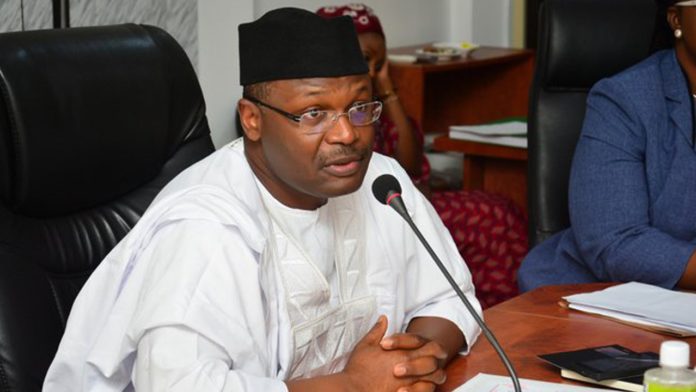 Its chairman, Prof. Mahmud Yakubu, said should the Electoral Act is amended, based on its proposals, the 2019 elections would be the last mainly manually conducted election.

He spoke in Lagos at a retreat on the review of the Electoral Act. The retreat, which was declared open by Deputy Senate President and Chairman of National Assembly Committte of Constitutional Amendment Ovie Omo-Agege, was witnessed by members of the Senate Committee on INEC, led by Senator Kabiru Gaya, and House of Representatives Committee on Electoral Matters, led by Dr. Sishati Dukku.

Omo-Agege reiterated the commitment of the National Assembly to electoral reforms and the deepening of democracy through constitution review.

He said the recent Supreme Court judgments on electoral litigations have made the review of the Electoral Act more compelling.

The Deputy Senate President said the anti-graft body may have a role to play in the prosecution of electoral corruption cases in the future.

Yakubu noted that the retreat marked the first time that the Commission and National Assembly members came together to discuss issues relating to the electoral legal framework.

He recalled that, last year, the electoral agency received from the Senate Committee on INEC “A Bill for an Act to Amend the Electoral Act (No. 6) 2010 and for Related Matters, 2019.”

Yakubu said the 26 clauses in the Bill sought to amend many sections of the Electoral Act, ranging from the neutrality of electoral officials to the compilation, display and storage of the voters’ register; legal recognition for electronic accreditation of voters; party primaries and the nomination of candidates for elective offices by political parties.

He also said a new provision was proposed to address the recurrence of the “Kogi conundrum” where a governorship candidate died between the commencement of polls and the declaration of winner, a situation not envisaged and clearly without any legal remedy under the Constitution, the Electoral Act and the Commission’s regulations and guidelines.

Yakubu said the new amendments also sought to empower the Commission to deepen the deployment of technology in the management of the voters’ register,  voting and result collation processes.

The INEC boss, who said the commission was drawing lessons from post-election litigations, a remedy was also needed for involuntary result declaration by returning officers.

Yakubu stressed: “We should find a way to deal with a situation in which Returning Officers are compelled to declare winners under duress. With 809 pre-election petitions filed before the 2019 general elections, the electoral legal framework should provide clear procedures for party primaries and consequences for violation. “Similarly, the right under the law to file pre-election cases in different categories of High Courts often leads to what lawyers call “forum shopping” by litigants and conflicting judgements by courts of coordinate jurisdiction on the same case, sometimes even on matters already settled by superior courts.

“We also need a new definition of over-voting with emphasis on accredited voters rather than the number of registered voters in a polling unit.

“Doing so will make the management of the margin of lead principle easier and considerably reduce, if not totally eliminate, the incidence of inconclusive elections and the cost associated with conducting supplementary elections which in most cases merely validate the outcome of the first ballot.”

Yakubu spoke on the prospect of electronic voting, stressing that reforms should focus on the deepening of the deployment of technology in elections.

He added: “Already, the Commission has an electronic register of voters. Similarly, voter accreditation has also gone electronic.

“It is time for a new legislation to remove all encumbrances to further deployment of technology in the electoral process, especially in the accreditation of voters and transmission of election results. Sections 49 and 67 of the draft Bill deal with these twin issues.

“These sections will be thoroughly discussed at this retreat. Working with the National Assembly, it is our hope that the 2019 general election will be the last mainly manual election in Nigeria.”

On how critical the review of the electoral legal framework is critical to preparations for future polls, the INEC boss said: “Where the passage of the Bill is delayed, it will affect the formulation of regulations and guidelines as well as the review and publication of the manual necessary for the training of ad-hoc staff for elections because both documents draw from the legal framework.

“There is need to expedite the process, particularly because the Bill under consideration at this retreat is the one emanating from the Senate. The House of Representatives is working on its own Bill. Given the urgency of the situation, the two chambers of the National Assembly (Senate and House of Representatives) may wish to consider adopting the current Bill and to organise a joint public hearing for the passage of the amendments into law in earnest.”

“This is more so because some of the far-reaching amendments proposed by the National Assembly would require the procurement of new equipment, training of election officials and piloting of new procedures ahead of the general election. “Early and adequate preparation is critical. Late deployment disrupts preparations and in an electoral process governed by fixed timelines provided by law, postponement must be avoided because of its far-reaching consequences as we have witnessed a number of times in our recent history.”

On the prosecution of electoral offenders, Yskubu said: “We look forward to the expeditious passage of the “Bill for an Act for the Establishment of the National Electoral Offences Commission” sponsored in the Senate by Senator Abubakar Kyari and co-sponsored by Senator Ovie Omo-Agege, which passed second reading yesterday Wednesday 4th March 2020. It is also on record that the “Electoral Offences Commission (Establishment) Bill 2020” sponsored in the House of Representatives by Hon. John Dyegh passed first reading on Thursday 27th February 2020.

“The nation can no longer afford to foot drag on this important legislation which will provide the framework for dealing with impunity and brigandage in elections which are becoming more brazen, essentially because violators of electoral laws are not effectively prosecuted.”