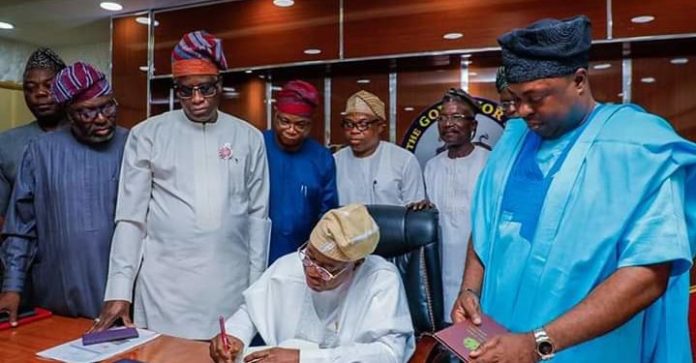 Gov. Gboyega Oyetola of Osun, on Monday, signed the 2020 budget of N119.5 billion into law, promising that the budget would be fully implemented.

The governor signed the budget in his office in Osogbo shortly after it was formally presented to him by the Speaker of the state House of Assembly, Mr Timothy Owoeye.

The News Agency of Nigeria (NAN) reports that appropriation bill was passed into law by the Assembly on Dec. 24.

Oyetola, who described the size of the budget as the most realistic, said the government would stop at nothing to ensure its full implementation.

He said that his administration decided to prune down the size of the budget, having realised the socioeconomic realities and the limited resources available to the state.

The governor, who promised to continue to do things that would make life more meaningful, worthwhile and abundant for the people of the state, assured them of better days in 2020 and beyond.

He said that the state would do everything possible to bring about the desired development across all the sectors, as captured by the budget.

While commending the leadership and members of the Assembly for a job well done, Oyetola promised to maintain the existing level of understanding and cooperation among the three arms of government in the state.

Earlier in his remarks, Owoeye, who described the signing of the bill as unique, noted that it was the first time in the history of the state that budget for the following year would be completed before the beginning of the year.

He described it as a demonstration of the Oyetola-led administration’s commitment to fiscal transparency, accountability and sustainability.