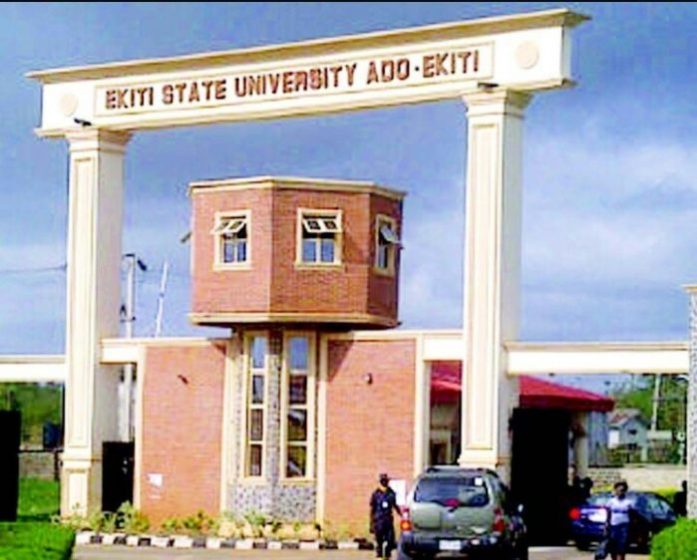 Workers of the Ekiti State University, Ado Ekiti grounded academic activities at the institution on Monday following the dismissal of over mass retrenchment.

The institution had on December 5 sacked over 900 workers institution who alleged to have been illegally recruited between 2016 and 2017, during the tenure of Governor Ayodele Fayose, have been sacked.

Discrepancies were said to have been found in the certificates of some of the affected workers, while others were also found not to possess the requisite certificates from the primary level.

The lecturers who protested within and outside the institution’s campus blocked the entrance gate as early as 7: 45am and chanting solidarity songs.

The protesting lecturers barricaded major roads and prevented vehicles from either leaving or entering the campus.

The protesting workers who were led by the major in various unions in the institution under the aegis of Joint Action Committee were seen carrying placards with various inscriptions and chanting solidarity songs.

The workers who disrupted academic activities, besieged the administrative building where member of staffs were equally chase out workers from their duty posts.

Addressing journalist, the NLC chairman in Ekiti state who dubbed as the SSANU chairman of the institution, Mr Kolawole Olatunde said the struggles would be a fight to finish between Labour and the management.

He said the action of the management was uncivilized and inhuman .

Also speaking other Labour leaders explained that the sack of over 900 staff was an act of wickedness, adding that the various basis for the retrenchment were flimsy.

They, however, threatened to continue with the Protest on Tuesday until the management rescind its decision on the sacked workers.

The labour leaders, equally, urged Governor Kayode Fayemi to called on the institution’s authority to reverse the decision to guarantee industrial harmony.

Meanwhile the leadership of three of the unions in the University, namely, Senior Staff Association of Nigerian Universities (SSANU), Non-Academic Staff Unions of Educational and Allied Institutions (NASU) and National Association of Academic Technologists (NAAT) under the auspices of Joint Action Committee (JAC) have been advised to maintain decorum while making their agitations.

The Vice Chancellor of the University, Professor Edward Olanipekun, gave the advice while reacting to the action of the unions to drive staff out of their offices after their joint Congress meeting held earlier on Monday

According to the Vice Chancellor, management would not watch and allow the unions to take laws into their hands by preventing those with legitimate businesses on campus to transact their businesses.

According to him, “There are laid down procedures to be followed under the labour law in particular if staff unions want to withdraw their services which have not been followed in this case by JAC.

Professor Olanipekun also frowned at the situation where law-abiding staff were being chased out of their offices and described the attitude as unethical.

He, therefore, appealed to staff and students to go about their normal duties, warning the leadership of JAC would be held responsible in the event of any breakdown of law and order in the University community.

APC warns Saraki against reintroduction of thuggery to Kwara politics