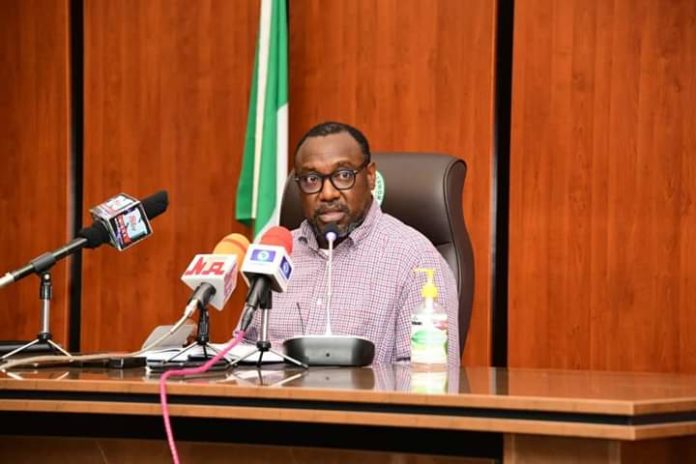 Governor Abubakar Sani Bello has called on Nigerians to shun their differences and unite to combat the deadly coronavirus (COVID-19) disease.

Governor Sani Bello, who made the call at a media briefing held in Government House, Minna, expressed happiness for testing negative to the dreaded COVID-19 while also sad about the positive result of others.

According to him, despite been tested negative, self-isolation will continue for him and his cabinet members, adding that in the next few weeks, a true picture of the state’s Coronavirus situation will be made clear.

The Governor stated that Nigerians must collectively fight the dreaded monster which knows no bounds stressing that it was not the time to start making mockery or stigmatizing those affected with the disease as anyone can get infected with it.

Governor Abubakar Sani Bello also extends the ongoing curfew from 10 am to 12 (midnight). This he said has become necessary due to lack of compliance.

The Governor stressed that stringent measures will now be employed against those who refuse to comply with the directive.

Governor Sani Bello said both intra-state and inter-state movements remain restricted for, at least, the next few weeks.

The Governor disclosed that the Ventilators ordered by the state government have started arriving adding that the government is also making efforts to have its own testing kits and test center.

He stated that each of the eight emirates will have a quarantine center except Kontagora and Bida, which are to have two centers because they have more local governments.

Governor Sani Bello said the state government was already in talks with Abuja Electricity Distribution Company (AEDC) so as to ensure a steady power supply of, at least, 18 hours in the state.

He assured that relief materials will soon be distributed to the less privileged through the wards in the state to serve as palliative measures and to ease the effect of restrictions of movement.

The Governor appreciated religious clerics for enlightening their people and also thanked Nigerlites for adhering to the law as well as the law enforcement agencies and health workers for doing a great job so far.

Wike to FG: Don’t relinquish to states your responsibility to security...