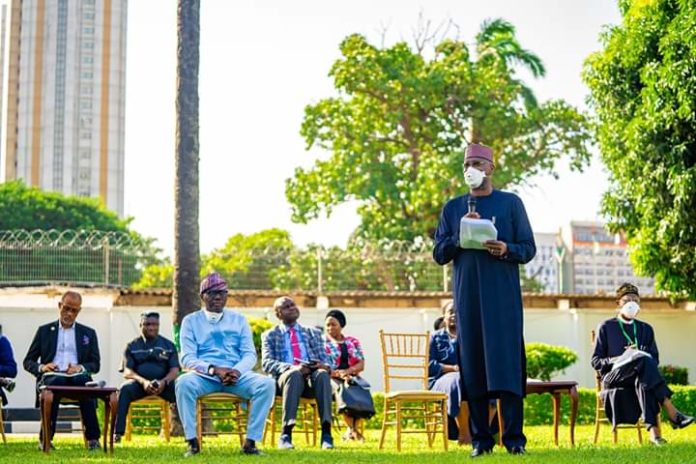 Lagos State Government has earned a remarkable commendation for its response strategy deployed to curtail the spread of the novel Coronavirus (COVID-19) in the country.

Secretary to the Government of the Federation (SGF) and chairman of Presidential Taskforce for the Control of the Coronavirus, Mr. Boss Mustapha, hailed Governor Babajide Sanwo-Olu for his resoluteness in driving the efforts towards flattening the curve of COVID-19 outbreak in the nation.

He said the roles being played by Lagos to curtail the coronavirus outbreak had raised the hope for other states in winning the fight against the ravaging pandemic.

Mustapha spoke when he led members of the Task Force on working visits to major isolation facilities in Lagos on Tuesday. The 12-member team were personally received by Governor Sanwo-Olu at its first port of call, which was the 110-bed Isolation Facility in Onikan.

The Task Force members, in company of Sanwo-Olu and top officials of the State Government, thereafter moved to other isolation centres across Lagos for inspection.

With over 80 active COVID-19 cases being managed, Lagos remains the highest burdened State of the pandemic. This prompted the Federal Government to integrate the State into the national single response command led by the Presidential Taskforce.

Addressing reporters after the inspection, Mustapha said the Presidential Task Force was satisfied with the comfortability at the facilities and medical equipment deployed to manage the cases of the infectious disease.

Describing the centres as “world-class”, the SGF said the Task Force was delighted by the work done by the Lagos Government, pointing out that the facilities had been fully equipped and prepared to manage COVID-19 patients in the case of escalation.

He said: “So far, Lagos State has been doing a great job. From what we observed during the inspection of various isolation centres, the State has put up world-class facilities in the management of those that are infected with COVID-19. We are satisfied with the kind of care and personnel deployed; it shows that we are on course in winning the battle.

“One thing Nigerians must know is that, we are very clear in the national strategy we have deployed against the coronavirus in terms of containment. Also, to try as much as possible to reduce the spread and speed up tracking of those that have been in contact with cases, so that we will be able to minimise the incident of community transmission. We are doing very well in implementation of the strategy.”

Mustapha urged Lagosians to be patient while the State remained under lockdown, urging them to support the combined effort of the State and the Federal Government towards breaking the cycle of the transmission of the virus.

The SGF said the success of the Federal Government in fully curtailing the ravaging pandemic was hinged on the capability of the Lagos Government in its response to stop the spread of the pandemic in the State.

“We cannot afford to leave Lagos to deal with the current situation alone. If we can get it right in Lagos, I believe we can stop the virus in other parts of the federation,” Mustapha said.

The SGF said the ongoing lockdown had started to yield positive outcome, stressing that the response that was triggered by the central government was achieving the desired objectives.

Mustapha said the burden rate of the virus in Lagos, Ogun State and the Federal Capital Territory (FCT) made the Federal Government to release 6,800 metric tons of the 70,000 metric tons of grains taken from the national reserve to support the vulnerable people in the three states under lockdown.

Within the next couple days, the SGF said distribution of the materials would commence.

Responding to enquiry on whether there would be extension of the lockdown, Mustapha said: “At the end of the first 14 days, we will do evaluations and review the objectives we have set. The extension of lockdown will be based on the progress we achieve in the first 14 days. Whatever the decision we take afterwards, it will be in the best interest of the people.”

In his remark, Governor Sanwo-Olu praised President Muhammadu Buhari for rising to the occasion of the national emergency by setting up a “high powered” multi-sectoral Taskforce on COVID-19 mandated to implement all measures to ensure the pandemic is brought under control.

The Governor said he, in the course of the inspection, shared some of the State’s activities that had yielded positive results and other measures being put in place to raise the level of preparedness of the State Government in case of exponential transmission.

He said: “We have gone round and assess some of our isolation facilities. We have also explained our other level of preparedness to the Presidential Taskforce team and they are happy with what they have seen. We can do more, even at level of where we are at the moment. Today’s efforts are to position our country and raise our capability to deal with future emergencies.”

Sanwo-Olu said the isolation facilities were built in a way to give patients a high level of comfort while being treated. He added that some of the facilities were equipped with CCTV communication system that will make it possible for relatives of patients to communicate with them during isolation.

Minister for Health, Dr. Osagie Ehanire, said he was impressed by the level of Lagos Government’s preparedness, noting: “Lagos is very well prepared and we are sending medical personnel to this State to learn few things they are doing well.”

Other quarantine facilities visited by the Governor and the Taskforce members included the 60-bed isolation centre at the Lagos University Teaching Hospital (LUTH) in Idi Araba, 120-bed centre at Infectious Disease Hospital (IDH) in Yaba and 200-bed isolation facility built at Gbagada General Hospital in Gbagada.

The Government is raising the capacity of the isolation facility, with additional 60-bed facility currently being built at LUTH and other areas across Lagos.