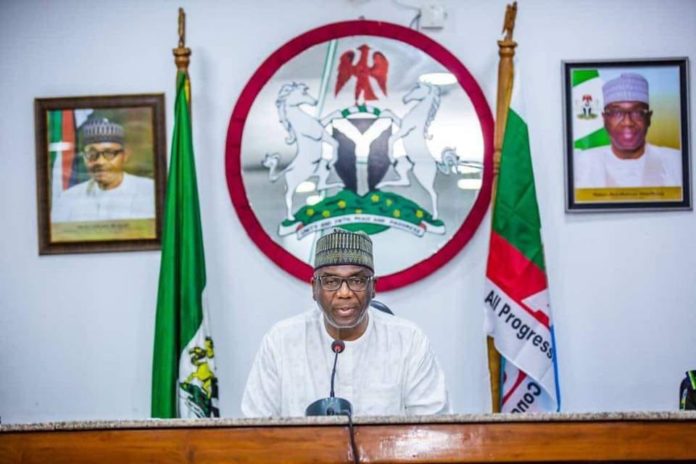 Kwara State Government has announced the immediate closure of its local and external borders amid ramped up efforts to block entries of vehicles from outside and prevent the outbreak of COVID-19 in the state.

The government however said the border closure excludes all categories of movement sanctioned in the broadcast of President Muhammadu Buhari, adding that the partial shutdowns within the state remain in force until further notice.

“The government hereby announces the shutting down of all our land borders to ban movement to the state from elsewhere. The only exemptions to this rule are those stated in the address of Mr President. Specifically, these are vehicles carrying agricultural produce, medical equipments, and officials on essential duties related to COVID-19 campaign,” Deputy Governor and Chairman of the Kwara State Technical Committee on COVID-19 Kayode Alabi told reporters in Ilorin on Tuesday.

“All previous restrictions and exemptions locally remain in force. A specific warning here goes to commercial motorcycles (Okada) who have been violating the shutdown orders. Any violators caught would face the full consequences of the law.”

Alabi also said the government will begin fumigation of markets and other specific locations after which specific markets would be designated for people to purchase essentials like food and medicines.

He commended corporate bodies and individuals for their donations to the government, specifically commending Senator Sadiq Umar, Lateef Fagbemi SAN, Unifoam, and Rajrab pharmaceuticals for their contributions to the state’s counter-COVID-19 efforts.

Alabi said the government’s palliative measures are ready for deployment and would be handled by a committee chaired by the Emir of Shonga Dr Haliru Yahaya who is due to brief the media on Wednesday to give the modalities.

The statement read: “The government has approved the fumigation of our markets and other specific places. 200 fumigating machines have been purchased for this purpose. This should begin latest April 2, 2020 to decontaminate these places. Thereafter, specific markets in the state would be designated and announced for people to purchase food stuffs and other essentials ONLY. Public transportation (Soludero buses) will be made available with strict adherence to social distancing and other preventive protocols.

“His Royal Highness the Emir of Shonga Dr Haliru Yahaya will brief the press tomorrow April 1, 2020 on the modalities of distributing the government’s palliative measures which shall be done in phases to ensure efficiency.

“The government expresses its appreciations to all those who have made various donations to the administration, while also calling on more corporate bodies and private individuals to support this effort. Specifically, the Government commends Senator Sadiq Umar (Kwara North) who donated N5m for this collective effort; the legal luminary Mr Lateef Fagbemi (SAN) who donated N10m for the COVID-19 campaign; Unifoam for the donation of 175 mattresses; Access Bank for the donation of 100-bed isolation tent; International Tobacco Company for giving us 10,000 bottles of hand sanitisers and 7,400 face masks; Rajrab Pharmaceuticals for giving us 68 cartons of hand sanitisers; and Kwara State Polytechnic for donating 200 bottles of hand sanitisers. These donations will complement the 15million litres of sanitisers, 40,000 litres of anti-virus solution, and 200 infrared thermometers already purchased by the Kwara State Government, among several other things. Similarly, 121 oxygen cylinders have been filled and deployed to Sobi Specialist Hospital, while 500-KVA transformer has just been installed to provide constant electricity there. We will continue to make public all donations made to us for the sake of accountability and transparency.

“In addition to the facilities on ground, the government is evacuating the Sobi Specialist Hospital and dedicate it entirely as COVID-19 response centre, among other steps. The various wards at the facility with about 20 patients are being moved to nearby government hospitals with all services intact.

“While thanking everyone who has donated materials and money for this cause, including those who are privately reaching out to the public, the government notes a dangerous trend in the way some palliatives are being shared. Pictures have surfaced online showing people moving from house to house to share things for whatever mileage. This is very dangerous as it could lead to unintended community transmission of Coronavirus.

“Following informed opinion of the medical advisory committee of the technical committee on COVID-19, the government hereby bans such house to house distribution of materials at this time. Donors or their privies can drop such materials at collection points in each ward while beneficiaries go there and pick under strict compliance with COVID-19 prevention protocols.  Further information will be given in this regard by His Royal Highness in his briefing tomorrow.

“Donors who may want to be identified with the gestures may wish to brand such materials or food stuffs in their names, political or social affiliations. Once again, the government commends everyone who has reached out to the poor at this time. However, such must be done without provoking a crisis we are trying to prevent in Kwara State.

“Finally, we wish to state that Kwara State does not have any confirmed case of COVID-19 as at this minute. We continue to be on the alert and we urge the public to be as specific as possible when offering intelligence to our medical team.”

Security: I’ll always take decisions in the best interest of my...