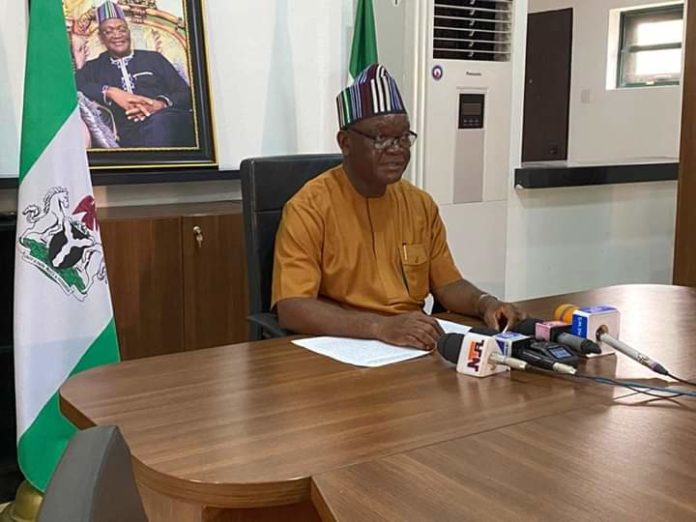 The Benue State Government yesterday explained its position over the controversy surrounding the woman who came into the state from London, and tested positive for the novel coronavirus.

State Deputy Governor and chairman, State Action Committee on COVID-19, Engr Benson Abounu took questions from journalists after a meeting of the Committee. He stated that everything done by the state government in respect of the index case was done in the best interest of the woman, her family and the entire people of the state.

THE STORY IN BRIEF
The woman; one Susan Okpe, a Benue indigene with British citizenship arrived Nigeria from London on Sunday last week to attend her late mother’s burial. On getting to the state, on Monday, she went straight to a meeting of the committee planning the burial. However, she felt unwell and so on Tuesday evening, reported herself to a private hospital in Makurdi, where the doctor after seeing her symptoms and learning that she came in from London, decided to keep her there for close observation instead of releasing her as she had requested. On Wednesday, officials of the state Ministry of Health and Human Services, having been contacted, came and took her sample. That sample and that of another patient suspected with COVID-19, were taken to the National Centre for Disease Control, Abuja (NCDC), where tests were carried out. The results came, and it was positive for her and negative for the second person.

However, the woman refused to accept the result of the test and insisted her symptoms were caused by her long flight from London. She therefore resisted been moved to the treatment centre at the Benue State University Teaching Hospital, Makurdi and it took several hours of pleading by the state deputy governor and the intervention of two of her brothers for her to be moved to the teaching hospital.

At the teaching hospital, she became agitated, rejected every form of treatment and demanded to be allowed to go home, insisting she was not sick. She refused the medical team to even take her vital statistics. That day a message purportedly from her crying of been abandoned, traumatized and held against her will surfaced on the social media, with her calling on Nigerians and Britons to come to her aid and rescue her from Benue State. Social media apparatchiks of all hues took over and thereafter turned the matter on its head. Politics came in. Tribalism came in. Gender came in. Some said the state government was looking for money. A number of people with bottled-up anger against Governor Samuel Ortom decided it was time to vent them. And so, they did.

What exactly is the true position of things? Here are excerpts of what the State deputy governor and chairman of the state Action Committee on COVID019 said in response to questions from journalists.

EXCERPTS OF HIS EXPLANATION
“On Wednesday morning, when I was briefed about a number of cases of people believed to have come into the state from areas prone to the pandemic, I took a very swift action. I instructed that samples from all the people that were suspected with having COVID-19, particularly those that are exhibiting symptoms such as, fever with temperature higher than normal, persistent coughing and difficulty in breathing should be taken to the National Center for Disease Control (NCDC) in Abuja, while those not exhibiting those symptoms seriously should go into self-isolation and should be watched by the surveillance team of the Action committee on COVID-19. Very swiftly, medical personnel went to Grace Cottage hospital on Thursday and took the sample of our sister and sent it to Abuja. The result came in the early hours of Saturday morning.

Of the two results that came, one belonging to a 21 year old patient was negative while that of Susan Okpe was positive. Going by the nationwide protocol on covid-19 infection, which is that if you are unwell and your temperature is higher than normal, you go on self-isolation until you are tested. If the result comes out and you are positive, then you should be transferred into a treatment Centre and that all the treatment centres should be housed by tertiary institutions. So, in Benue State, we have two treatment centers, one is at the Federal Medical Centre and the other one is at the Benue State University Teaching Hospital (BSUTH), both in Makurdi.

When the result came in on Saturday morning, the Committee again moved swiftly to the hospital and requested that the woman be transferred to the treatment center at BSUTH, but she resisted from 2pm to 7pm as according to her, she did not believe in the result that she is positive. By 7pm, I went over there with the surveillance team of the committee and we pleaded with her to be moved to the teaching hospital. At about 9pm, she eventually yielded after I got two brothers of hers to talk to her. At the end of the day, she was transferred to the University Teaching hospital’

Yesterday Sunday, a team of medical doctors went to take her vital statistics and review her case, but, again, she became agitated and refused to allow anyone to treat her. Let me make one point clear, where she is being kept is a brand new building and everything therein is brand new, including the bed, which she was the first to lie on it.

All sorts of things have been said and we are not going to join issues with her. We know she is unwell, and it is our duty to counsel her. We do understand why she is agitated. Any one of us, who is in her position, may possibly feel that way. Today, the good news is that I was told by the medical personnel that her temperature is now normal and that she has not been coughing as she was when she came in. This means, she is on her way to recovery.

The next step according to the protocol is to take her sample again and send to NCDC lab in Abuja. Don’t forget, the test was not conducted by any agency of the state government. It was conducted by the NCDC in Abuja. According to protocol, there is need for another swap to be sent to Abuja and if the result comes out negative, she will then be released from this hospital but into self-isolation. That is the protocol all over the world, until after some time and a second test is conducted, and if the second one comes out negative again, then she will be allowed to mingle with the general public. That is where we are. I will like to add that, whatever the State government is doing is for her own personal interest, that of her direct siblings and the general public in Benue state; to ensure that COVID-19 doesn’t spread in Benue State.