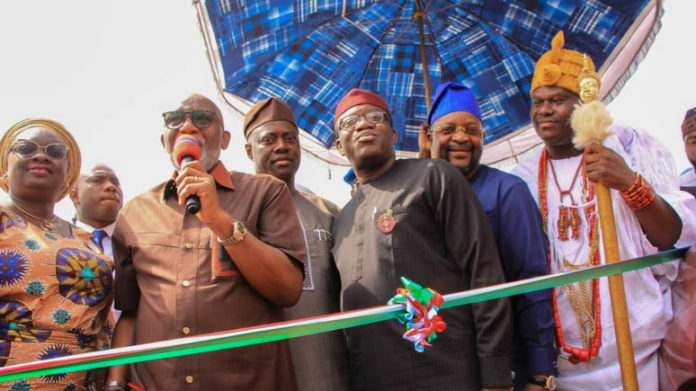 Assaulting an Amotekun officer will attract a fine of N250,000 or a prison term of one month or both.

However, an Amotekun officer cannot be sued for whatever he does in the course of duty but only what he does in his personal capacity.

Other South-West governors have submitted similar bills to their respective houses of assembly.

Section 36 of the bill states, “Any person who wilfully hinders, delays, obstructs or assaults a member of the Ekiti State Amotekun Corps in the course of the exercise of his lawful duties under this law shall be guilty of an offence and liable on conviction to imprisonment for a term of one month or to a fine not exceeding two hundred and fifty thousand naira only (N250,000.00) or to both such fine and imprisonment.”

The bill further states that the security organisation must be headed by a retired law enforcement agent who is not lower than the rank of Major or its equivalent in any other security agency.

Section 14 reads in part, “There shall be appointed by the governor, a corps commander for the agency, who shall be a retired law enforcement officer or military officer not below the rank of a major or its equivalent in other security services.

“The corps commander shall be a person with at least 10 years cognate experience in security matters; (b) be responsible for the day-to-day running of the affairs of the Ekiti State Amotekun Corps and implementation of the decisions of the board; (c) hold meetings with his counterparts in other states, particularly Ogun, Lagos, Ondo, Osun and Oyo states on a quarterly basis or as may be collectively determined by the corps commanders in those dates.”

The bill also provides for the establishment of an Amotekun board which is expected to meet not less than four times a year.

Meanwhile, the Ekiti State Attorney General and Commissioner for Justice, Wale Fapohunda, on Tuesday called for comments from members of the public on the bill for the enabling law for the establishment of Amotekun corps.

Fapohunda said the state Ministry of Justice posted the bill on its website on Monday to enable Ekiti residents and other stakeholders to view it and make comments.

The AG said “Deadline for the submission of comments is Wednesday, 12 February, 2020, at midnight.

The bill, which the AG presented to the state governor, Dr Kayode Fayemi, on Monday, will be discussed at the State Executive Council on Wednesday (today).

The ministry stated that Amotekun Corps would also “ensure that all persons travelling along the highways, major roads, remote areas, are free to participate in their normal social and economic life without hindrance” and as well “assist the police to carry out any other lawful activity for maintaining law and order in the state”.

However, the Osun State House of Assembly says it has not officially received the bill for Amotekun.

The Speaker, Timothy Owoeye, said this on Tuesday

Speaking through his Press Secretary, Kunle Alabi, Owoeye said the parliament was however expecting the bill “any moment from now.”

But one of our correspondents learnt Osun State Executive Council extensively discussed the bill in its weekly meeting on Monday.

In the same vein, the Oyo State House of Assembly said on Tuesday that the bill on Amotekun was being expected to be transmitted to the House from the executive, adding that the passage of the bill would be prioritised.

The Deputy Speaker, Oyo State House of Assembly, Abiodun Fadeyi, said, “In Oyo State, the transmission of the bill from the executive arm to the state assembly should happen in due course. We still have between now and 12pm on Friday before we can say that the bill fails to arrive as scheduled.”

Also, the Ondo State House of Assembly has declared that it was in support of the Operation Amotekun security outfit in the South-West, but it had not received the bill to legalise it from the executive.

The House Committee Chairman on Information, Mr Gbenga Omole, however, said the House was on recess and had not received any bill from the state governor.

Omole said, “We are currently on recess and we will resume on February 24 ( 2020) but in spite of that we are yet to receive the bill as I am talking to you now (Tuesday).”