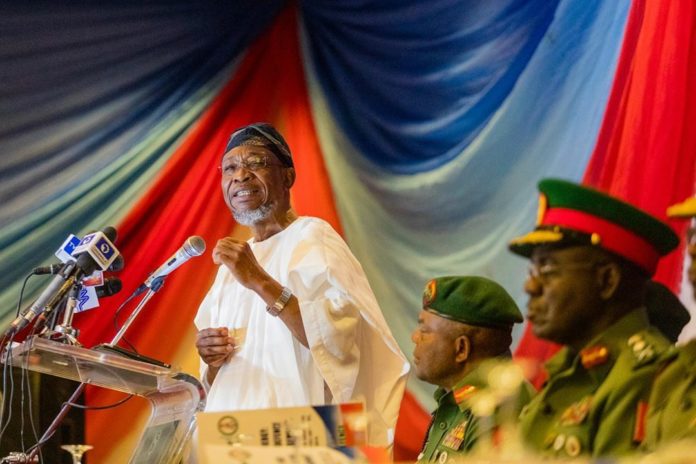 The National Industrial Court, Abuja, on Wednesday, fixed March 31 to deliver a ruling in an application seeking warrants for contempt of court against the Nigeria Immigration Service Comptroller-General, Muhammed Babandede, and Minister of Interior, Rauf Aregbesola.
The application sought that Form 48 be granted in order for Form 49 to be issued against the respondents to appear before the court to show cause why they should not be committed to prison for not complying with the judgment of the court.

The judgment directed that they should align the rank of an ex-staff, Made Oguntoyinbo, to Comptroller of Immigration or face the possibility of a jail term.

The judge, Justice Rakiya Haastrup, adjourned the matter until March 31 for ruling after Mr Ogutoyinbo’s counsel, Femi Adedeji, brought the application for Notice of consequences of disobedience to order of the court in pursuant to Order 9 Rule 13 of Judgment Enforcement Rule

The application, in addition, sought the respondents to obey the directive contained in the order of the judgment delivered on March 29, 2019, by the same court.

In the judgment, the court ordered that they should immediately align the rank of the ex-staff to Comptroller of Immigration among other orders.

News Agency of Nigeria (NAN) reports that the judgment that had not been complied with, held that the crux of Mr Oguntoyinbo’s case was that he was denied promotion several times by the respondents and when he was eventually allowed to participate in 2015, his result was never released.

The judgment further ordered that the respondents should immediately release his result in the 2015 promotion exercises and align his rank to that of Comptroller of Immigration ( CIS), as his contemporaries who joined the service the same time with the claimant.

NAN also reports that another order made by the court which had not been complied with was the order of payment of the sum of N9.7million as his salary arrears.

The court in the judgment also directed the NIS to pay Mr Oguntoyinbo the sum of N2million as general damages and awarded the sum of N250,000 to him as the cost of prosecuting the suit.

Mr Oguntoyinbo’s counsel had earlier brought an application through a Motion to garnishee the Central Bank of Nigeria (CBN) and Polaris accounts of NIS and the application was granted by Justice Olufunke Anuwe of the same court.