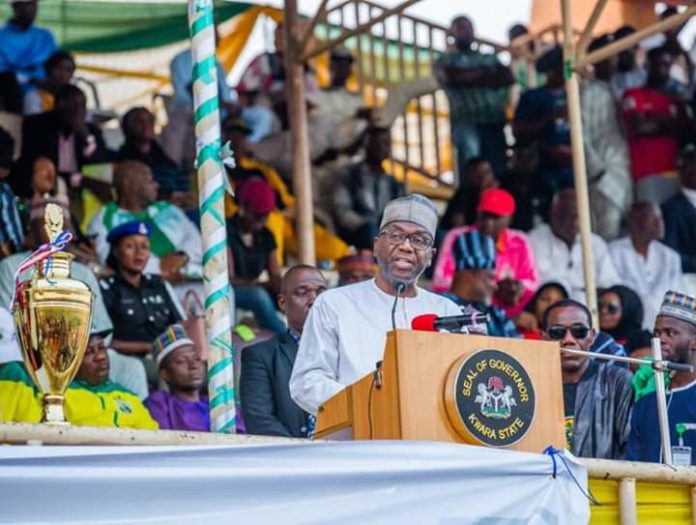 Kwara State 7th Sports Festival ended at the weekend amid colourful displays of great talents from across the state, with the Federal Government commending Governor AbdulRahman AbdulRazaq for taking special interest in youth and sports development.

The weeklong fiesta, which was last held 15 years ago and featured athletes from across Kwara’s 16 local government areas, peaked on Saturday with 4X100 metres relay involving about eight finalists and the football finals between Ilorin East and Ilorin South.

Dare said the reintroduction of the sports festival, added to AbdulRazaq’s inimitable commitment to youths empowerment, meant a lot for sports development in the state. He added that the Federal Government has also taken notice of the Governor’s interest in human capital development especially as it relates to youths inclusion.

Joanna Nnazua Kolo, sports and youths development commissioner in the state, said the festival was long dead and buried until the Governor approved its revival to properly engage the youth and energise sports in the grassroots.

“This tournament to sensitise the youths that this is the time for them to think of being positively relevant in the social scheme and re-channel energies towards positive and socio-economically viable ventures,” Kolo added.

AbdulRazaq, meanwhile, has said the festival formed a part of his plan to spotlight sports in the state as it used to be in the early decades of Kwara. He recalled that he once represented the state as a footballer.

“Not only has the Festival put Kwara back in the spotlight in the sports industry nationwide, it has again solidified our unity as a people and reassured the Kwara people that we are here to rewrite the story of the state for good,” he said.

“This festival has offered our youths the opportunity to channel their energy to productive activities that have earned them more respect in their communities and beyond. They have seen, once again, that they can be celebrated and rewarded if they get it right.

“Our government is making the necessary investments to make sports more attractive and rewarding for our youths. The 2020 budget is a big testimonial statement in this regard. For instance, we are giving a facelift to the Indoor Sports Hall. We are a building a twin squash court. Gradually, we will restore the glory of Kwara using sports and investments in critical infrastructure that would jump-start the economy.

“I thank the Honourable Minister of Sports and Youth Development and his team for this honour of gracing the closing ceremony. We hope to partner with you and bank on your goodwill and the fatherly support of Mr. President to give better opportunities to Kwara youths.

“Finally, as I declare this  event closed, I urge our young people to imagine a world of boundless opportunities ahead of them. But the path to success is often laced with hard work, humility, sacrifice, and determination. With the national sports festival (Edo 2020) just a few weeks away, I believe this festival is a tonic for us to go and overwhelm the rest of Nigeria. Let us go out and tell the world that it is indeed a new beginning for Kwara.”