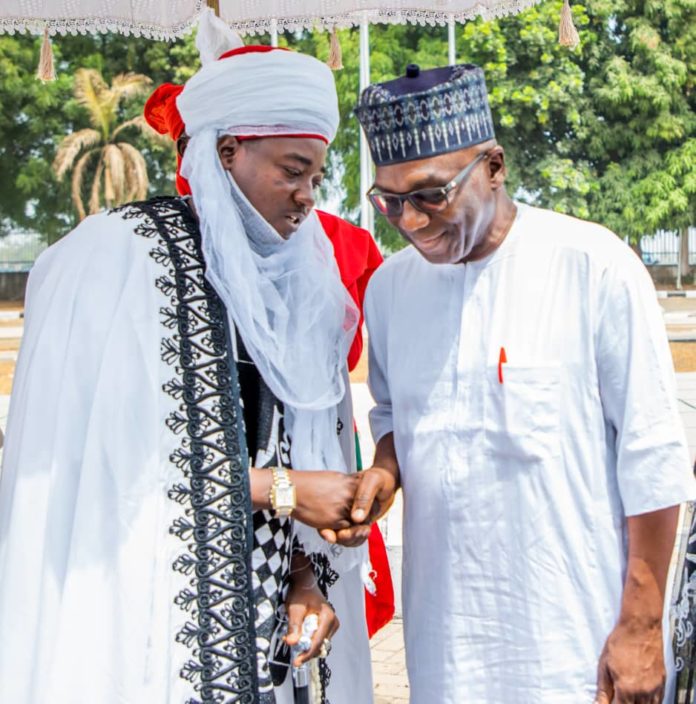 More encomiums at the weekend came the way of Kwara State Governor AbdulRahman AbdulRazaq as the government embarks on massive rehabilitation of schools and other basic amenities across the state.

A delegation of the Old Students Association Patigi Secondary School in Patigi Local Government, led by the Etsu Patigi Ibrahim Umar Bologi II, commended AbdulRazaq for the comprehensive renovation of the school 50 years after it was established, and other high-impact projects of the administration.

The delegation, which included the Etsu Tsaragi Aliyu Ndakpotwa Abdullahi; former Head of Service Mohammed Dabarako; and former Permanent Secretary Mohammed Koro, called on the Governor to keep up the good job.

“Since the establishment of our alma mater (Patigi Secondary School) some 50 years ago, no government has done what you are doing in the area of comprehensive rehabilitation. We are here, following our grand patron (the Etsu Patigi), to commend you for the numerous things you have been doing for our communities,” Ndakpotwa said on Friday.

Dabarako, who is the chairman of the upcoming 50th anniversary’s central working committee, said the alumni association is pleased with the renovation of the school which he said is “progressing very well”, adding: “It will be naïve on our part not to come and thank you for your milk of kindness.”

Dabarako, among other requests from Edu/Patigi axis of the state, urged the government to help prevail on Aso Rock to dredge the River Niger from Baro to Jebba to curb the perennial flooding in Patigi and Edu local governments.

“Secondly, for quite some time now the issue of Hydroelectric Power Area Development Commission (HYPADEC) has been going on. We request for your timely intervention on this matter and your magnanimity in the area of appointment of executive director to the office of HYPADEC from Edu/Patigi region that is mostly affected by the flood,” he said.

AbdulRazaq, who commended the delegation for the visit, said the ongoing school rehabilitation was necessitated by years of neglect of infrastructure in the education sector and the near collapse of basic amenities across board.

He said the 31 schools currently being renovated were the first phase of what would be continuous rehabilitation of education facilities in the state.

“What we’ve simply done there is what the government should be doing. And we are faced with several choices when it comes to the issue of renovation. We either spread the money all over (with little impact) or pick some schools and then spend what is currently available there. We are fixing some schools completely and some schools to have six classrooms or more rehabilitated. The nature of neglect in the education sector has been a total collapse,” he said.

“It is a tough task. We have hundreds of schools to fix, but we take it gradually. We have awarded contracts for 31 schools in the first phase and work has started. We will move to the second phase shortly.”

AbdulRazaq also said he is initiating a joint lobby with the Niger State government to get the dredging of the River in the next federal budget, commending Honourable Ahman Patigi for his efforts in the direction.

Umar Bologi II said the Governor has been doing so well to fix the state, praying the Almighty God to deepen his wisdom and strengthen him to continue to deliver good governance to the people of Kwara State.