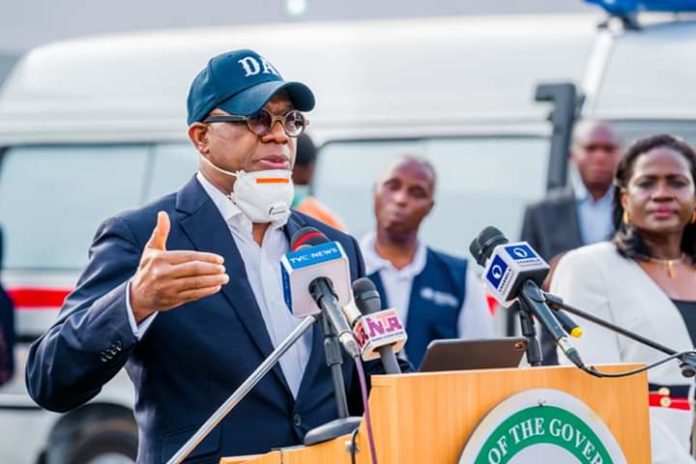 The Ogun State Government says the State will be locked down totally on Friday in line with the directive from the Federal Government.

The State Goverrnor, Prince Dapo Abiodun stated this at a press conference and inauguration of the State COVID-19 Isolation Centre at Ikenne, Ikenne LGA.

The Governor said though the restriction of movement to and from neighbouring states and the international border, would be effective from 11pm Monday, March 30, the total shutdown of the State would commence on Friday, this week.

Governor Abiodun noted that the State Government has informed and obtained permission from the Presidency to shift the total lockdown date to Friday, to enable government prepare adequate paliatives for the people.

“We are making efforts to give some paliatives to our people. We will do this by creating food banks to store food items like yam, cassava, rice, tomatoes and the like to be distributed to our people, especially the poor and vulnerable in all parts of the State. We are working out a proper distribution method using Community leaders and Community Development Councils.

“We will also give some financial paliatives to our transporters who will not be able to move as a result of the lockdown. I want to say, however, that the paliatives will cut party lines. During this period, market women can sell their goods in front of their houses,” he clarified.

He appreciated the Ministry of Education for coming out with e- learning platform, where students are taught from homes using the television, adding that a Biomedical Laboratory would be established to fast-track treatment of the virus, while a tele- medicine platform would be launched to enable people have access to healthcare without going to the hospital during the lockdown.

Prince Abiodun also disclosed that though the pandemic situation in the State was not critical, government has ordered 20 ventilators and procured more ambulances to confront the virus headlong.

The Governor said the State has over 300-bed isolation and treatment centres, made up of the 21-bed facility at the Olabisi Onabanjo University Teaching Hospital (OOUTH), Sagamu, 100-bed facility at Iberekodo, Abeokuta and the 128-bed facility at Ikenne, thus making the State the first with the largest of such facilities in the country.

He disclosed that over 100,000 bottles of hand sanitizers had been produced by the State government for distribution to the people, just as an Enforcement Task Force has been put in place to enforce the lockdown.

While commending the Federal Government, individuals and corporate bodies for their efforts towards tackling the pandemic, the Governor called on retired health workers from the public and private sectors to come out and assist government, adding that all markets and motor parks in the State would be disinfected.

Speaking earlier, the State Commissioner for Health, Dr. Tomi Coker, described the virus as a pandemic that should be tackled with all seriousness it deserves, while she thanked the various partners, health workers and donors for their efforts.

The representatives of the World Health Organisation (WHO), Dr. Sunday Abidoye and Dr. Oladipo Ogunbode of the Nigeria Centre for Disease Control (NCDC), in their remarks lauded the State for its proactiveness and adherence to their suggestions, adding that measures so far taken by the State Government would go a long way in containing the spread of the disease in the State.

Borno State Governor, Professor Babagana Umara Zulum has written a condolence letter to the United Nations following the killing of a humanitarian worker by...