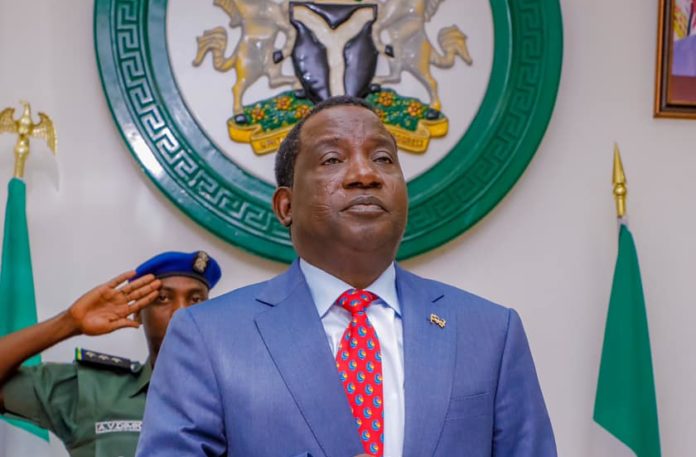 Plateau State Governor Simon Bako Lalong and Chairman of the COVID-19 Emergency Response Committee has expressed gratitude to corporate organisations and individuals within the State who have responded to his call for donations to the COVID-19 ENDOWMENT FUND established by the State Government.

Governor Lalong who was represented at the presentation of various donations by Secretary to Government of the State and Coordinating Secretary of the Taskforce Prof. Danladi Abok Atu said the State is grateful to all those who have heeded to the call for assistance.

Among organisations which have contributed materials and food items include Grand Cereals which donated 10 tonnes of fortified flour, 100 cartons of 2.75 litre vegetable oil, and 400 crates of eggs sourced from local poultry farmers. The donations were presented by the Managing Director of the Company.

Another donation was made by the Nigerian Veterinary Medical Association, Plateau State Chapter who presented 6 cartons of face masks and 3 cartons of hand gloves to the Government. The Association also informed the government that the National Veterinary Research Institute has trained manpower and equipment that can be utilized for testing Corona Virus. What is needed according to them is the purchase of reagents and few accessories to make the facilities functional.

There were further donations by the Zuma Steel Company whose company representatives delivered hand sanitizers and face masks as part of their contribution to the Government efforts to tackle the disease.

Another organisation that made donation was the Nasco Group of Companies who delivered 500 cartons of hand sanitizers and washing soap to the State Government. General Manager Administration, Alhaji Shehu Nyalun said apart from the donations, the company will also directly make donations to members of the Public within its domain.

Prof. Danladi Atu who received all the donations on behalf of Governor Simon Lalong said the Government was elated that these organisations have responded positively. He said the items will be distributed for use in responding to the disease.

It would be recalled that the political appointees in the State including the Governor agreed to a 50% cut in their allowances as their contribution to the fight against corona virus.

The Government recently announced that it has established the Plateau State Covid-19 Support Fund. The Account is operated by the UBA which has donated 28.5 million naira. For other corporate organisations and well spirited individuals who may wish to contribute, the
Account Number is: 1022751747.

No cure yet for coronavirus – WHO