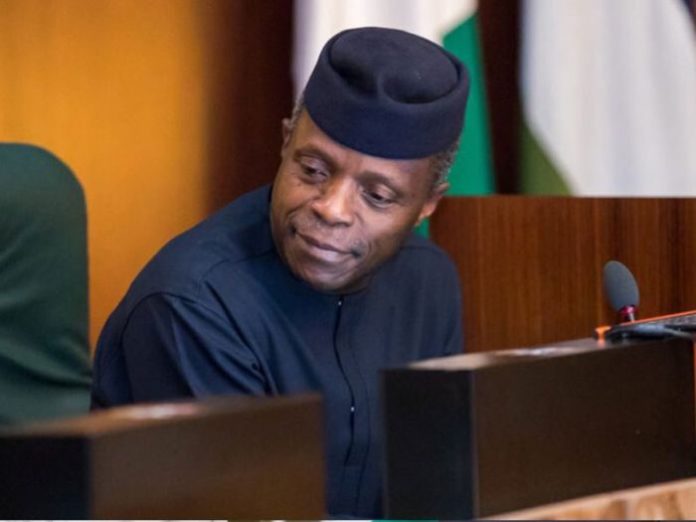 The Federal Government will continue to implement “game-changing infrastructure projects” around the country to connect the nation’s economic zones and drive economic development, according to Vice President Yemi Osinbajo.

The Vice President further noted that most of the signature projects of the administration, including the Lagos-Kano Rail, Mambilla Hydro Plant, Second Niger Bridge, amongst others would be completed during the second term of the Buhari administration.

Mr Osinbajo stated this in Kano on Monday during a one-day working visit to the State to commission some infrastructural projects by the Governor Abdullahi Ganduje administration.

Speaking at an interactive session with leaders and stakeholders at Government House in Kano, Vice President noted that “one of our signature projects is the Lagos-Kano rail, which has gone now as far as Abeokuta, and we are hoping that we will be able to complete the Lagos-Kano rail in the shortest possible time.

“We expect that the infrastructure projects of the Federal Government, including the Mambilla Hydropower plant, the Second Niger Bridge and several others will be completed in our second term. We hope we are able to complete as many as possible before the end of our term.”

Speaking further on the position of the Federal Government in providing the necessary infrastructure to drive economic development, Mr Osinbajo said infrastructure was central to the agenda of the Buhari administration in all sectors.

“In a few years, as a matter of fact, in two budget circles, we invested about N2.7 trillion on capital alone, which is the highest in the history of the country despite the fact that we are earning almost 60% less than previous governments.”

Mr Osinbajo also said addressing the poverty concern in the country remains one of the major issues adding that the Federal Government under President Buhari is focused and committed to reversing the situation significantly.

Referring to Governor Ganduje who had spoken earlier on the same subject, the VP observed that “poverty, as the governor pointed out, remains one of the major issues that confront our people. And the President again on June 12, made the declaration that it is the intention of our government to take 10 million people out of poverty every year till the next decade, that is taking 100 million people in ten years, out of poverty.

“Now, that may sound ambitious but I must say to you that we are extremely committed towards achieving it and we are extremely focused. This explains why it is that we launched the Social Investment Programmes.

“Any country of our size that does not have a social investment programme or establish a social safety net for its people will be acting irresponsibly. That is the reason why we launched the programme.”

While commending the Kano State government for taking the lead in providing game-changing infrastructural projects and the enabling environment necessary for the economic development of the State, especially in health, education and other sectors, the Vice President assured Governor Ganduje of the Federal Government’s continuous support for states that are complementing national efforts at tackling poverty, providing access to education and health, amongst others.

At the ground-breaking foundation laying ceremony for the Cancer Treatment Centre at the Muhammadu Buhari Specialist Hospital, Prof. Osinbajo commended the state government for taking the lead in aligning to the national cancer control plan of the Federal Government.

In his remark, Governor Ganduje thanked the Vice President for the honour of visiting the State to commission the projects and announced the establishment of the special fund to cater for the needs of indigent patients desirous of treatment at the cancer treatment centre, when completed.

Projects commissioned by the Vice President in the State include the Aminu Dantata flyover of over 2km, at the Murtala Muhammad Way, and the Tijjani Hashim Galadima Kano underpass way, in Kofar Ruwa.

Mr Osinbajo also laid the foundation stone for the construction of the Sheikh Qariballah Nasuru Kabara flyover, in Shahuci.

While in Kano, the VP visited the National Monuments and Museum in Kano with selected school children from the State, where he and the children were conducted round the monument which used to be the palace of the Emir of Kano

No country in the world can develop further without contributions of...