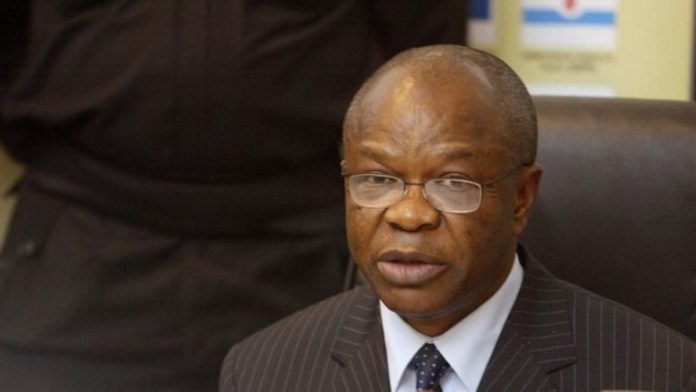 Justice Nicholas Oweibo of the Federal High Court in Lagos has dismissed an application by a former Chairman of the Independent National Electoral Commission, Prof Maurice Iwu, seeking the transfer of his N1.23bn fraud trial from Lagos to Abuja.

The judge, in a ruling on Friday, said the application lacked merit.

Justice Oweibo said a look at the list of witnesses submitted by the Economic and Financial Crimes Commission showed that most of the witnesses were in Lagos, with some retired, hence “justice will be better served for the trial to proceed in Lagos”.

Iwu, who was arraigned on four counts of money laundering and fraud, had through his lawyer, Mr Ahmed Raji (SAN), pleaded that the case be transferred from Lagos to Abuja on the basis of his old age.

At the previous proceedings, Raji had told Justice Oweibo that at the age of 70 years, his client was too old to be coming from Abuja to the Federal High Court in Lagos to stand trial.

Besides, Raji said the transactions leading to the charges against Iwu took place in Abuja.

The SAN said, “My Lord, this defendant is over 70 years of age and he always travels down to Lagos and books a hotel whenever this matter comes up. It will amount to great agony for him to continue with this trial in Lagos. ”

But the prosecuting counsel for the EFCC, Mr Rotimi Oyedepo, opposed the prayer.

After declining the application on Friday, Justice Oweibo adjourned till April 28 for trial.

The EFCC had October last year arraigned Iwu on four counts, wherein he was accused of laundering N1.23bn in the build-up to the 2015 general elections, in which President Muhammadu Buhari defeated then-incumbent President Goodluck Jonathan.

According to the EFCC, Iwu, between December 2014 and March 27, 2015, aided the concealment of N1.23bn in the account of Bioresources Institute of Nigeria Limited with number 1018603119, domiciled in the United Bank for Africa.

The EFCC said Iwu ought to have reasonably known that the N1.23bn formed part of the proceeds of an unlawful act, to wit: fraud.

The prosecution told the court that the ex-INEC chairman acted contrary to sections 18(a) and 15 (2) (a) of the Money Laundering ((Prohibition) Act 2011 and was liable to be punished under Section 15(3) of the same Act.

But Iwu pleaded not guilty to the charges.