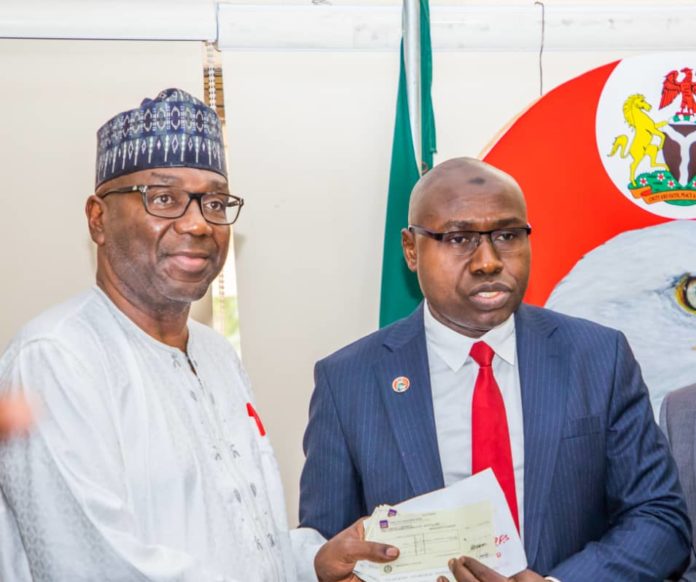 Kwara State Governor AbdulRahman AbdulRazaq on Tuesday received another N263,327,800 funds recovered from some officials of the previous administration, saying the money would go into funding social investment programme.

That brings to roughly N373m the looted funds so far handed to the new administration, although the total recoveries by the Kwara office of the EFCC in the past one year are in excess of N8bn worth of assets and cash. Last year, the EFCC handed over N111m to the state government.

AbdulRazaq commended the anti-graft body for the recovery and the handing over of the looted funds.

“We are quite exited for getting this money. This is a huge amount of money to be released to us at this time. It is mind-boggling that the situation has come to this,” AbdulRazaq said at the brief ceremony where the EFCC Ilorin Zonal head Isyaku Sharu handed the cash to the Governor.

“Anytime arrest is made, some persons would rain abuses on the EFCC and even the state government but the money keeps coming in. Yet they claim nothing was stolen.

“We thank the EFCC. So far, we have got over N300m and it is a continuous exercise. On our part, we will be judicious in utilising the fund. We will always remember that one day, we will leave this position we are today and we will be made accountable too. That is why we have to be responsible in what we do now.”

AbdulRazaq said the over N111m earlier recovered and released to the state formed the seed money for the social security programme now underway for the benefits of the poorest of the poor in Kwara.

“The presence of the EFCC here makes everybody to sit up and being responsible and brought about change in perception, dynamism and thinking of the civil service and the entire citizens. We must all come together to kill corruption,” he said.

Sharu, speaking earlier, said the latest recoveries were majorly from the money looted from the Kwara State Internal Revenue Service (KW-IRS) and local government fund by some former government officials.

“About five billion naira was allegedly siphoned from KWIRS and shared in the ratio of 30/70 by some notable individuals in the state through their cronies,” Sharu announced.

He noted that the Zonal Office has secured 48 convictions and recovered at least N8.5bn worth of assets and money.

“The mandate given to us to conduct a holistic and all-inclusive cleanup of over two decades barefaced fraud and pen robbery on the good people of the zone is achieved. This is evident from the overwhelming success achieved in terms of convictions and recovery of assets,” Sharu added.