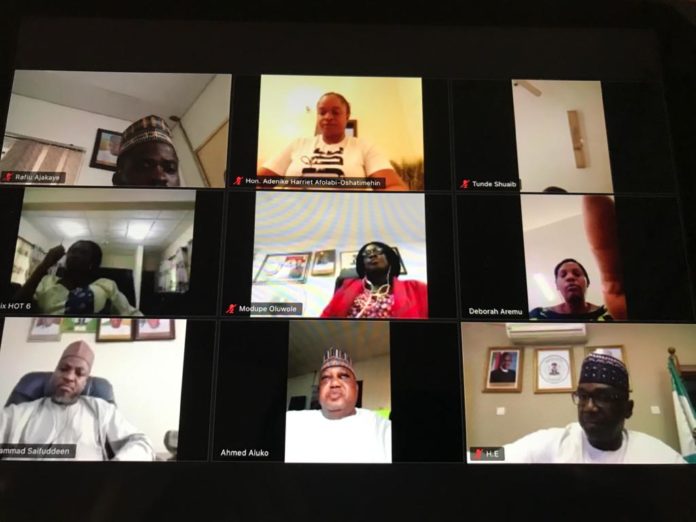 The teleconference was attended by all members of the cabinet from their various locations, with Governor AbdulRahman AbdulRazaq saying such non-physical interaction offered a glimpse into what would happen in the future.

“We need to keep our eyes on the ball and not be distracted. Very shortly, we are having a committee to review the 2020 budget in the face of our current economic realities. We have to cut down on recurrent expenditure. Whatever happens, projects that directly impact on the live of our people will be prioritised,” AbdulRazaq said.

Apparently referencing the steep drop in the price of crude oil, the Governor said the national economic outlook is bleak and has necessitated urgent budget reviews to align available resources with priority projects to serve the public.

The Governor however said at least 20 of the 26 ongoing urban renewal road projects and 70 percent of the schools being rehabilitated would be ready by May 29, while the administration’s various water and energy projects have made tremendous impacts on the people across the state.

“We will have a lot to deliver to our people (on our first anniversary). But this is the time to keep our eyes on the ball and not be distracted by some noise on the social media. We know where such noise is coming from. We have been elected to serve the people. It is not time for politics,” the Governor added.

“Despite the mischief from some quarters, the people of Kwara State appreciate the fact that we truly care for them. This is the spirit we must keep in our continuous engagement with the people. Let us also support our people at our own individual level.”

The Governor also said soft loans would soon be extended to transport workers like motorcycle, tricycle and cab drivers who have been seriously affected by the shutdown to flatten the curve of transmission of COVID-19.

He said such loans, to be repaid in trickles after the COVID crisis is over, would come under the state’s social investment programme to help the drivers cope with the shutdowns.

He commended the Kwara State Technical Committee on COVID-19 for the “good work they have been doing for our people”, urging all cabinet members to also join community advocacy to deepen public enlightenment without compromising public safety.

AbdulRazaq said Kwara may soon receive donations from Abuja which would strengthen the palliatives for the masses — and beyond the categories currently receiving palliatives.

Deputy Governor and Chairman of the Technical Committee Kayode Alabi said Kwara has emerged as one of the most prepared states in Nigeria for the pandemic, citing the state of its facilities, the readiness and commitment of its manpower, and the steady distribution of palliatives to the poor to lessen the impact of the development.

Alabi, who was giving a report on his committee’s work, said the recent refurbishment of the oxygen plant which can serve other states and the multimillion naira machines recently purchased for the isolation centre underline the commitment of the administration to serve the people.

The teleconference came ahead of the official launch of a new website which has been designed to be interactive, bring government closer to the people, and strengthen Kwara’s ranking in the national ease of doing business chat.

Who speaks for the North? – Bolaji Abdullahi

2023: Presidency should be contest of ideas, not where you come...