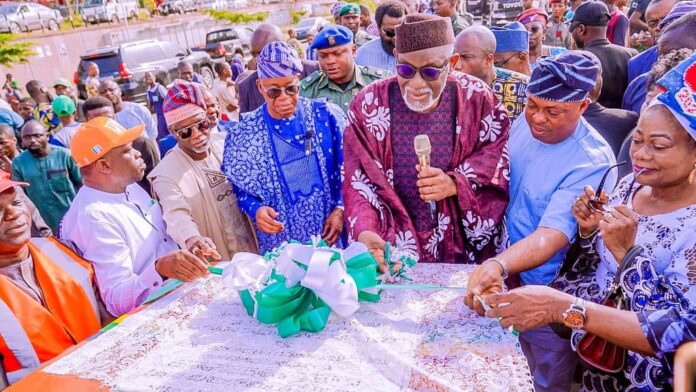 Akeredolu described the performance of Oyetola in the State as incredible and worthy of emulation.

This is even as Governor Adegboyega Oyetola said the construction of the flyover was a child of necessity aimed at putting a permanent end to avoidable road accidents and other mishaps hitherto being experienced by road users and residents of the State.

The newly-inaugurated Olaiya flyover was completed within the one-year time frame allotted to it a few months ago with a target to substantially ease the growing traffic, eliminate unnecessary cases of accident, secure the lives of the valued citizens and further enhance the architectural beauty of the State capital.

Addressing the people at the venue of the inauguration, Governor Oyetola said the successful completion of the flyover was an attestation to the efficacy of the Alternative Project Funding System, a novel development model introduced by his administration to boost the State’s development and infrastructure needs.

He said his administration has taken care of the fears and evil of fiscal indiscipline and lack of implementation, which hamper projects and services in the nation’s public service as seen in the myriad people-centred and masses-focused projects being inaugurated and delivered for the use of the people of the State in the about four years of being at the helm of affairs.

The Governor who described the flyover as an architectural masterpiece, a paragon of aesthetics and a socioeconomic signature on the economic transformation captured by the Development Agenda of his administration, said, “This is another fulfilment of our electoral promise we exchanged for the mandate of our people”.

He said his government has so far proved that infrastructure and economic development are doable in a depressed economy and that stagnated development in a struggling economy is a product of intellectual laziness, dearth of creativity, shortage of innovation and lack of political will.

“It (Olaiya flyover) is a worthy complement to the over 500km roads we have rehabilitated and constructed in our four years in government so far.

“Fixing our State’s infrastructure deficit is a critical item on our Development Agenda. This is because no economy can truly succeed without adequate infrastructure to make life easy for residents and businesses.

“This realisation accounts for why we are engaging in mass spread of infrastructure development across the State to stimulate development in line with our Development Agenda.

“There are however a few other roads that are still on-going, while some are nearing completion. Among these roads are: Ife Township Roads; Inisa Road and Osogbo-Iwo Road.

“We have also focused attention on opening up our rural roads with the aim of connecting them to the urban areas. This is to stimulate rapid state-wide development and facilitate ease of movement for our people and goods from one part of the State to another.

“The strength of this Olaiya Flyover is in the faithful implementation of traffic regulations by our relevant officers and the resolve of our people to obey the rules. I, therefore, appeal to us all to faithfully play our parts so that we can be united in saying never again to loss of lives and economic wastage in our dear State.

“Olaiya Flyover is your property and heritage. Own it. Make the best use of it and pass it to our unborn generations as you go about your businesses and daily lives”, he added.

Inaugurating the flyover, Governor Akeredolu, commended Oyetola for being committed to the welfare and general well-being of the people of the State.

Akeredolu who described the flyover as unprecedented in the history of the State, expressed confidence in the fact that the facility would go a long way at meeting the infrastructure needs of the axis, most importantly the road users.

“I am not new to Osun. I am not new to Osogbo. It is important to me for many reasons. I have followed the history of this State. I say it without mincing words that Oyetola has made his mark in the sand of time. If you don’t know what he has done, see this place, you will see part of what he did. I am overwhelmed with joy for giving me the opportunity to partake in this programme.

“This is historic in the history of Osogbo. Oyetola has made history. I congratulate you for your resilience in the face of daunting challenges even from those that are supposed to be your friends.

“We knew what you met in the State and we know what you have done and where you have taken the State. We can’t lie to ourselves, we are fearless — you have tried. We were here when salaries were owed for several months but you came and the story changed. I commend you for making the interest of your people primary consideration.

“For me, development is about people. All efforts conceived and geared towards the amelioration of the welfare of the people must be commended. You are indeed a talk and do governor. Any government that prioritizes the interest of the people is an organized one.

“The verdict of history will be written after your eight years. You have done excellently well. I know the crucial role infrastructure development plays in any society as it opens up everywhere. Some people may be saying road is not what they will eat, but I know it brings development.

“Living in an environment will be stress free if infrastructure is put in place for socio-economic development to thrive. We know what you have done. God will reward you. As we can see, direct beneficiaries of this initiative are numerous both within and outside the state.

“I thank you for insisting to discharge this for the people of Osun. We were here when the results of the election were declared. We were downcast but you were not. I commend you for the way you have managed the affairs of this State. You have done incredibly well. You shall be returned for another four years. How many Governors can boast of what you have done in four years? You have justified the confidence bestowed on you by your people.

“I congratulate the people of Osun on the tremendous boost they have witnessed in the State. It is not only mouthing Omoluabi ethos that matters but upholding it. I say to you, Oyetola, you are indeed an Omoluabi, true and true,” he added

Earlier in his welcome address, the Commissioner for Works and Transport, Engr Remi Omowaye, said the successful completion of the flyover would in no measure add value to the socioeconomic activities in the State in general and Osogbo in particular.

He commended the people of the State for their love and perseverance throughout the construction period saying, “It is a thing of joy that the State has successfully inaugurated it for the use of the generality of the people in the state and beyond.

The Contractor of the project and Chairman Peculiar Ultimate Concerns, Engr Olanrewaju Adeleke, reassured the people of the quality of work done on the flyover which according to him has the capacity to meet immediate and future needs of the road users.

He said: “Every engineering work is meant to meet immediate and future requirements. This project has met its billing. It has solved all the immediate problems and future road mishaps. I commend the Alternative Project Funding Approach of the State that has helped to actualise this iconic Olaiya flyover”