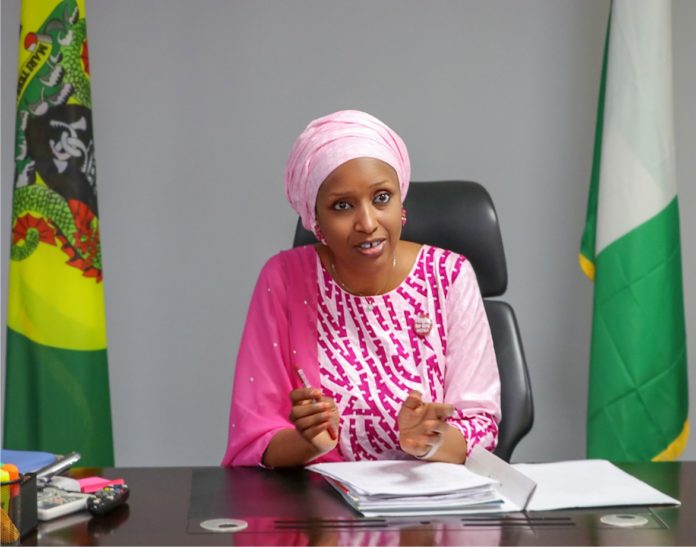 The managing director of the Nigerian Ports Authority (NPA), Hadiza Usman, has denied having a romantic relationship with the governor of Kaduna State, Nasir El-Rufai, saying no such affair helped her clinch the NPA top job.

Usman, chief of staff to El-Rufai from 2015 to 2016, spoke on the subject while appearing on TVC programme on Monday, in celebration of the International Women’s Day.

She described claims about her relationship with El-Rufai as an “over flogged story” that has been on for awhile.

“I am definitely not his girlfriend,” she said of El-Rufai. “The governor is my mentor and my boss.

“He has been very supportive of my career and the career of every other woman that has worked for him.

“As you are aware, Kaduna State is the first state in northern Nigeria that has an elected female deputy governor; so you can see he has that commitment having women in positions of authority so that rumour is completely untrue,” Usman said.

Forty four-year-old Usman, a politician and activist of the #Bringbackourgirls Movement, was appointed the ports authority MD in July 2016, by President Muhammadu Buhari. Her appointment generated controversy as many saw it as ethnically based and questioned her qualification and experience for the role.

The NPA boss, however, said such response was part of attempts to pull down women who are in high positions in society.

“These are the things they say to women to pull us down, they say for everything you have done in terms of showcasing your competence they always reference and attribute it to the fact that you are in a relationship with another person,” she said.

“The bottomline is that you got a job and you perform, so when people reference that you got there because you were somebody’s girlfriend, that is a pull down,” Ms Usman said.

Usman spoke about the allegation that the Buhari government is nepotistic, saying such bias should not separated from to the ability and competence of the person appointed.

“There is a lot of issues that the presidency has been appointing northerners into key positions,_ she said.

“What I would say is that, the minister of finance — is the person not capable and competent or not qualified? The managing director of NPA — has the person not performed well or not?

“So to that extent when we narrow our limits and our competence to our ethnic and religious backgrounds I think it is reducing what we are as a people. And people should be ascribed to be in position because of their capacity and competence not based on where they come from,” she said.

When asked by the TV programme anchor if it would not be unfair to exclude other regions, she said, “If you go back in 2015, there was a time we had a minister of finance that was not from the north, we had the head of FIRS that was also not from the north, so we have had all those situations that at certain times a particular region has more positions in the country. At that point who said what?

“It is important for us to understand the larger play and see at a point when it was not favouring you what did you say about it, no one raised it that we have so many people from the South-west.”

President Buhari has been accused of being nepotistic in his appointments, with rampant allegations that he appoints only Nigerians from the north into sensitive and high positions in the country.

The government denies wrongdoing, saying the president appoints people he trusts and that he has been fair to other regions of the country.