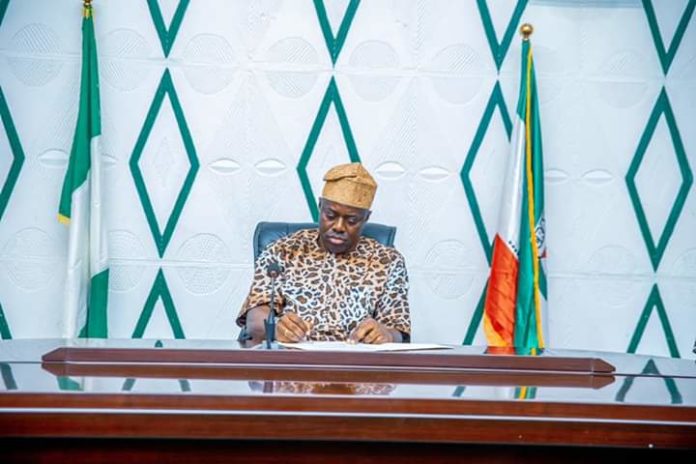 The Oyo House of Assembly had on March 3, passed the bill to the governor for assent after organising a public hearing and after scaling third reading.

The governor, who just arrived from the United States for a business summit, gave his assent to the bill one week after being passed to him by the lawmakers.

The Speaker of the Oyo State House of Assembly, Adebo Ogundoyin, had earlier indicated that the signing of the bill would be speedy since it bothers on common interest.

The signing of the bill into law held at the Executive Council Chamber, Governor’s Office, Oyo State Secretariat, Agodi, Ibadan.

In attendance on the occasion are the deputy governor, Rauf Olaniyan; Chief of Staff, Chief Bisi Ilaka; Head of Service, Ololade Agboola; Secretary to the State Government, Olubamwo Adeosun; and the state Attorney-General and Commissioner for Justice, Oyewo Oyewole.

Also present on the occasion are the Speaker, Oyo State House of Assembly, Adebo Ogundiran, Deputy Speaker, Abiodun Faceyi, the Clerk of the House, and other officials of the state.

We’re in final phase of campaign against insurgency, other forms of...