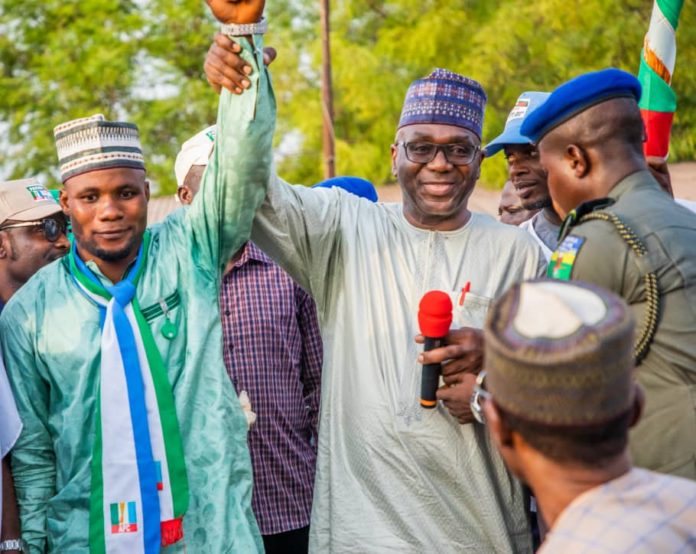 Kwara State Governor AbdulRahman AbdulRazaq on Monday flagged off a marathon APC campaign tour crisscrossing various communities in Patigi Local Government ahead of Saturday’s by-election for the Patigi Constituency of the State House of Assembly.

AbdulRazaq told locals how his administration is steadily changing the story of the area through various developmental projects that included renovation of schools, rehabilitation of roads, irrigation sites, and water projects.

The campaign tour has so far touched down in Esanti, Patigi, Kpada, Rogun, and Lade as at Tuesday afternoon, with a few other communities slated to receive the APC team led by AbdulRazaq himself.

Accompanied by Senator Abubakar Sadiq (Kwara North), House of Assembly Speaker Yakubu Danladi, federal and state legislators, cabinet members and local party apparatchiks, the Governor said his strides have justified the confidence of the voting public and would again speak for the party in the Saturday ballot.

The poll comes three months after the death last December of Hon. Saidu Ahmed Rufai of the APC who held the seat.

The APC candidate for the fresh ballot is Adam Ahmed Rufai.

“You can see the crowd. People are understandably excited because we have been fixing basic amenities unlike in the past. We scored about 75% here in the 2019 election. With the support of the people, we will exceed that in Saturday’s election,” AbdulRazaq said, commending the people for their support in the 2019 poll.

“We are working very hard and steadily to address the challenges in this area. We are aware of the challenges you faced as a result of overflow of River Niger. I have spoken with the Governor of Niger State and we are making efforts to ensure that the dredging of the River Niger is captured in the 2021 budget.”

He said the government is concerned about the havoc flooding wreaks on farmlands and houses every year.

The governor, who officially received some local government chairmen and other opposition leaders into the party, assured the people of Patigi that the government remains committed to giving them the basic infrastructure that would impact lives.

“We are also launching our Social Investment Programme this month to begin School Feeding Programme, support our market men and women, artisans to jump start their businesses and enterprises,” he said.

“We are happy to be here. We are not visitors to this palace anymore. Let me once again thank you for the overwhelming support the party got in this area in the last general elections. We seek your support for our candidate, Adam Ahmed Rufai, in Saturday’s election.”

The APC delegation had earlier visited the palace of the Etsu Patigi where the Patigi Emirate Council promised continued support to the present administration in the state.

Sadiq, for his part, assured the people of the area that government officials from the North would continue to work with the AbdulRazaq administration and the Federal Government to attract more development to the region and Kwara as a whole.

Speaker Salihu said the present administration could boast of ongoing developmental projects across the 58 wards in Kwara North, calling on electorates in Patigi constituency to cast their ballot for Hon. Ahmed Rufai of the APC to further attract dividends of democracy to the area.