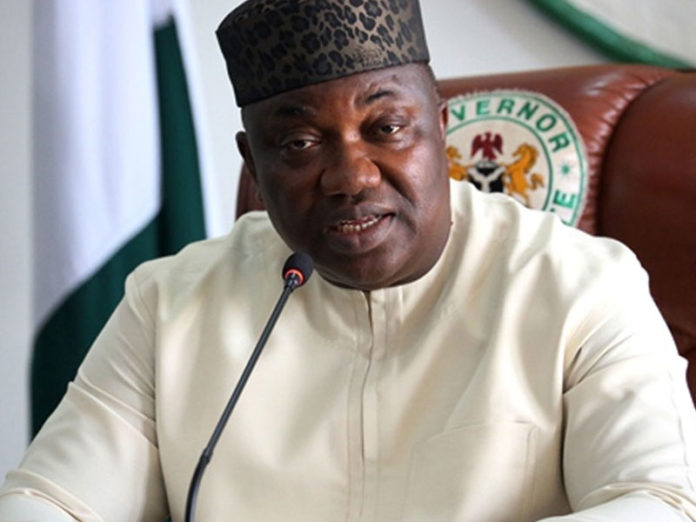 Gov. Ifeanyi Ugwuanyi of Enugu State has declared that all precautionary measures put in place in the state to contain the spread of Coronavirus pandemic (COVID-19), remain in force, in the overall public interest.

The governor’s decision was contained in his Easter Message to the people of Enugu State, which largely dwelled on Coronavirus Disease pandemic ravaging the world.

Gov. Ugwuanyi appreciated the people of the state for their understanding and cooperation towards the state government’s efforts to contain the spread of COVID-19 in the state.

The governor pointed out that his administration was not unmindful of the difficulties and inconveniences the precautionary measures present, stressing that “they are undoubtedly in the best public interest”.

This came as a cross section of Enugu stakeholders commended Gov. Ugwuanyi for standing firm on the precautionary measures, in spite of pressure from various quarters and even when some states relaxed theirs.

Also in his Easter Message, Gov. Ugwuanyi commended the 17 Local Government Councils, stakeholders, political leaders and others, for complementing state government’s efforts in awareness campaigns and palliatives to rural communities.

He offered special commendation to health workers for their sacrifice to keep the people of the state safe from the pandemic and also lauded the security agencies, other relevant public institutions, for enforcing compliance and ensuring security of lives and property.

While thanking various religious groups and their leaders for their continued support, the governor urged ‘Ndi Enugu’: “Let us celebrate this Easter in supplications to God, staying safe and observing the various guidelines and directives released for the prevention of further spread of COVID-19”.

Reacting to Gov. Ugwuanyi’s stance on the precautionary measures, a leader of the state and member of the Peoples Democratic Party (PDP) Board of Trustees (BOT), Amb. Mrs. Justina Eze, said that the governor has “demonstrated the highest level of sensitivity and commitment to the safety and wellbeing of the people of our dear state”.

Amb. Eze applauded Gov. Ugwuanyi for his “focused and people-oriented leadership”, and for exhibiting the political will to contain COVID-19 in the state through various state government’s interventions and support for the state’s Multi-Sectoral Rapid Response Team for the pandemic as well as state residents.

Her words: “His Excellency, Gov. Ifeanyi Ugwuanyi, has proved to the people of Enugu State that he really cares for their health, safety and wellbeing.

“This bold stance by our governor that the enforcement of the precautionary measures to contain the spread of this deadly viral disease remains, even when some states, out of pressure, had relaxed theirs, is worthy of commendation and tells more about his commitment to our wellbeing.

“Since this pandemic reared its ugly head, we have seen our governor’s steadfastness to ensure that the people of Enugu State are safe and protected. His administration approved and released N330 million and additional N20 million to the state’s Multi-Sectoral Rapid Response Team to discharge their duties.

“We have seen the state government activate three Isolation centres in Enugu and Nsukka, and at the same time, carrying out massive reconstruction and rehabilitation of Colliery Hospital Enugu to be dedicated as an Infectious Disease Isolation and Treatment Centre.

“All educational institutions, markets, land boundaries, churches, among others, were closed to achieve the social distancing protocol, while the state Fire Service commenced the decontamination and fumigation of the state.

“I learnt that the state government is, at the moment, distributing palliatives, which include the state’s Coal City Rice, to the less privileged in our remote communities through the churches, the physically challenged and other organizations. All these are to ensure that this COVID-19 is contained in this state and I sincerely commend our governor”.

2023: Those With Questionable Wealth Should Not Be Elected – Olawepo-Hashim