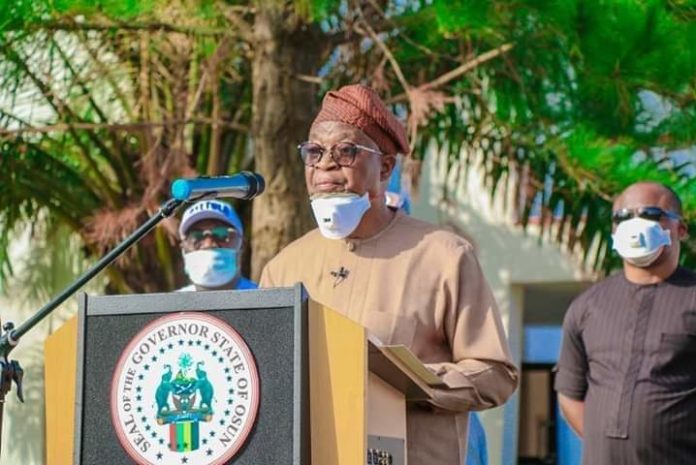 The Osun State Governor, Adegboyega Oyetola has ordered the express payment of stipends due to 25,907 vulnerable citizens in the state as part of palliative measures to cushion impacts of the state-wide lockdown.

Oyetola also directed the immediate distribution of Debit Cards linked to the accounts of the beneficiaries in a bid to ensure transparency, accountability and seamless process.

The State Commissioner for Youth and Sports, Hon. Lawal Azeez Olayemi made these disclosures while fielding questions from journalists in Ile-Ife, during the distribution of the Debit Cards to the beneficiaries.

Opeyemi, who described the scheme as one of the best social intervention programmes in the country, disclosed that the governor had approved the payment of N20,000 each to 15,289 elderly citizens and people living with disabilities captured under the Special Grant Transfer (SGT) scheme.

He added that approval had also been given for the immediate payment of N7,500 stipends to 10,618 beneficiaries who are vulnerable youths captured under Public Work Fare (PWF) programme.

The commissioner who maintained that the administration of Governor Oyetola was committed to the people’s welfare, noted that the gesture would go a long way in transforming the lives of the beneficiaries.

He clarified that the disbursement of the funds under the SGT and PWF was different from the Federal Government Conditional Cash Transfer recently launched by the Governor.

Olayemi added that the Governor had also mandated the immediate release of the monthly and quarterly stipends to the beneficiaries as part of efforts to alleviate the effects of hardship that the people are going through due to the lockdown.

According to him, the gesture would go a long way to promote the general well-being of the beneficiaries and by extension, make life pleasurable for them.

He said the scheme which started in July, 2019 was a partnership between the Osun State Government and World Bank.

“This is a collaboration between the state government and World Bank designed to alleviate poverty, hunger and unemployment among the people in the state. We commenced the exercise in line with the governor’s directive to ensure that every beneficiary under the scheme get paid.

“There are two categories of beneficiaries. The first are the set of people living with disabilities and the aged. They are 15,289 and captured under the Special Grant Transfer (SGT). Also, there is Public Work Fare (PWF) which is designed for the youths and the beneficiaries under this are 10,618.

“The elderly ones and those living with disabilities are given N20,000 each quarterly while the beneficiaries under the Public Work Fare (PWF) each take home N7,500 monthly.

“Though this programme has been on since last year’s July but to ensure high level of transparency and accountability, the state Governor had approved the production and distribution of Debit Cards to the beneficiaries.

“Before now, the beneficiaries used to receive their stipends by hands, but with this new technology, the process will be easier.

“The Debit Cards which is linked with the beneficiary’s account is aimed at ensuring easy access to funds. This social intervention programme is different from the Federal Government Conditional Cash Transfer recently launched by the governor”, Olayemi said.

Earlier, the Head of unit, Public Work Fare and Special Grant Transfer, Youths Employment and Social Support Operation, Mrs. Funmilayo Oladosu, expressed confidence in the ability of the scheme to turn around the socioeconomic fortune of the beneficiaries.

She commended the state government for introducing new technology into the scheme, saying the innovation would lessen the stress that some of the beneficiaries do face to access their stipends.

“This process is very impressive because this is a process where each of the beneficiary’s name has been ascribed on his or her debit card and linked with his or account”, she added.