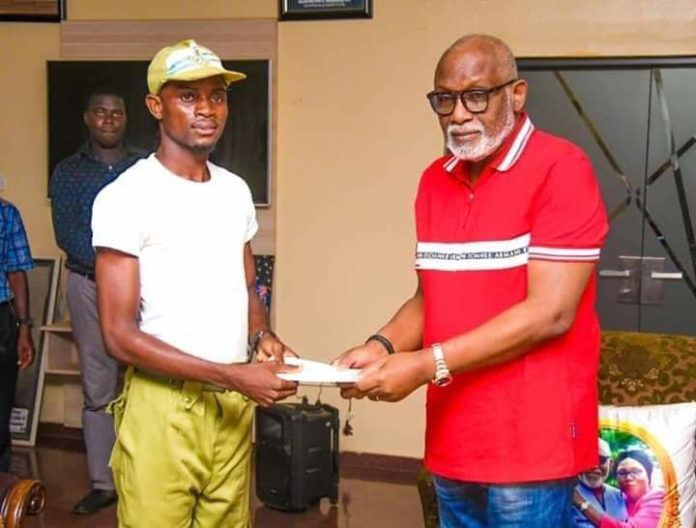 Concerned by the widespread of the Covid -19 pandemic across the country, a member of National Youths Service Corps (NYSC) serving in Akure, the Ondo State Capital, Isreal Arogbonlo, has donated his March allowance to the state government to support the fight against the Coronavirus pandemic and help alleviate its effects on the people.

The donation was received by the Governor, Arakunrin Oluwarotimi Akeredolu,SAN, at the Government House, Alagbaka, Akure on Tuesday, April 7, 2020.

Governor Akeredolu described the gesture as commendable, stressing that the donation could save a whole family from starvation, as movements of people have be restricted to prevent the spread of the Covid-19.

Arakunrin Akeredolu stressed that the most important thing that the corps member has demonstrated is the unusual spirit of giving, which he said is worthy of emulation.

While presenting the cash donation to the Governor, Arogbonlo said his decision to support the Government with his allowance was borne out of the teachings he received at the NYSC orientation camp to always think of what individuals can do for their goverment.

He said: ”I extended what we have been taught in the camp. This is part of my little way of supporting the Government in the fight against the Covid-19 pandemic.”

She also announced the donation of several bottles of hand sanitizers produced by corps members in the skill acquisition and development vanguard team of the state NYSC.

We must ensure electorate’s right of free choice, its violation undermines...