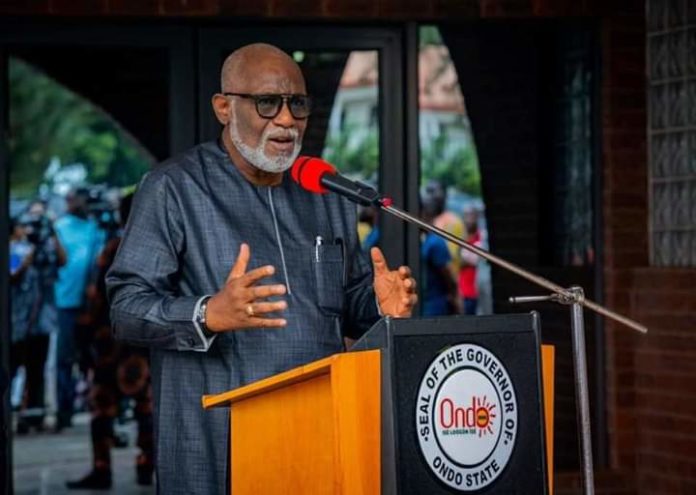 Ondo State Governor, Arakunrin Oluwarotimi Akeredolu, SAN, has said the confirmed index case recorded in the state on Friday has little or no expansion potential.

The Governor, who spoke during a state broadcast, explained that the confirmed case, who is a military officer, arrived the state about two weeks ago from India on an official assignment.

Governor Akeredolu, who said he had discussed with the Brigade Commander, further explained that on his arrival in the state, the military officer placed himself on isolation until he developed symptoms which turned out to be a positive case after test.

The Governor said: “When you trace the history of the officer, you will know that it leads us to little or no potential expansion. He came and put himself in isolation, the Brigade Commander spoke with me and confirmed this to me. All we have to do to prevent the spread of the virus has been done with this man in self isolation.

“I want to talk to our people and allay their fears, there is no need to panic. This has been contained within a room. Remember I took the lead in subjecting myself to test because I felt I have been out of the state.”

While rolling out the efforts put in place by his administration to combat the Covid-19 pandemic, Governor Akeredolu said: “We have strengthened our precautionary measures, we closed our schools and sent our children home, we suspended public gatherings and advised against religious gatherings.

“We have scaled down the activities in our Government House and Secretariat and we have asked the civil servants from level 1 – 12 to stay at home. We have also closed our markets.

“After that, we have now gone ahead to fumigate our markets and motor parks. We have also directed a lock down of our borders when we found out that a number of people from neighbouring states were moving in.

“We have also decided to assist our students by having special educational broadcasts. We have also set up special relief distribution and respond fund committees.”

Governor Akeredolu noted that the committee on relief distribution will operate, purchase and share foodstuffs through the local government areas.

While thanking the people of the state for keeping faith with government on the fight against the Covid-19 pandemic, the Governor said the one confirmed case is not unexpected, adding that the people must not be too anxious and should continue to practice social distancing and cleanliness by washing their hands with water and soap.

We will recover Oyo’s money from contractors who failed to deliver...