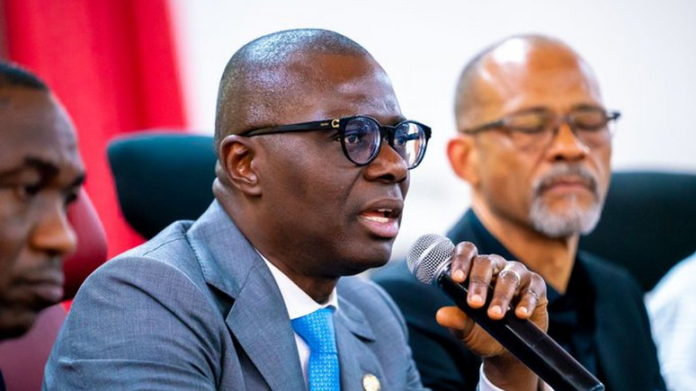 Lagos State Governor Babajide Sanwo-Olu says a  total lockdown is imminent if the cases of coronavirus continue to increase.

Sanwo-Olu said this while giving an update on the situation of the pandemic in the state at the State House in Marina on Friday.

Out of the 70 confirmed cases nationwide, Lagos accounts for 44, but the governor said going by the development, the state was gradually moving towards the number.

Sanwo-Olu said, “We are moving in the direction of a total lockdown but there are numbers or indices that we need to see before we carry it out, which we have yet to see. We need to see a huge spike in the numbers of confirmed cases, so, we are looking at that.”

Sanwo-Olu also said based on available data, out of the 44 confirmed cases in the state, Ikeja and Eti-Osa local government areas had the highest number of patients, adding that the government was focusing on those areas.

However, the state Commissioner for Health, Prof Akin Abayomi, in an earlier press briefing said the state might witness 39,000 cases of COVID-19 in a worst-case scenario.

Abayomi, therefore, urged residents to adhere to the social distancing rules to contain the spread of the disease.

He said, “Our mathematical modelling shows that the worst-case scenario is that we may see up to 39,000 cases in Lagos, but if everyone practises good social distancing, the figure will be limited to 13,000.

“If we add social distancing to active contact tracing, then we will be able to bend the curve further. The figures may seem alarming at this point, but this is just to emphasise to the Lagos community to follow the instructions of the incident commander to make sure that we practise social distancing.

“Looking at the same timeframe from the introduction of the index case, you can see that Lagos State is not seen anywhere near what Spain, Italy, and Iran are showing. So, at weeks two and three of our index case, we are flat and at week four, we have 37 cases; while at the same fourth week, Italy, Iran, and Spain had more than 20,000 cases.”

The commissioner added that the state was tracing 3,000 contacts who might have had contact with some of the confirmed cases.

Meanwhile, Sanwo-Olu directed a dusk-to-dawn curfew in Lagos starting from Sunday to allow the state to carry out a comprehensive disinfection of the metropolis.

He also said the state would close the domestic airport.

He said, “I am hereby directing a statewide curfew from 8pm to 6am, starting from Sunday until further notice. This is to enable us to carry out comprehensive disinfection of the Lagos Metropolis.

“I am pleased to note that we have taken possession of over 200 disinfecting machines, and starting today, we will be disinfecting all major highways, bus stops, markets, parks, and other public areas.

“With effect from Sunday, we will be closing the domestic airport in Lagos, the General Aviation Terminal and the MM2. All movements in and out of Lagos through the two domestic terminals will, therefore, be suspended from Sunday for two weeks in the first instance. The only exceptions will be flights carrying essential supplies and those on emergency operations.”

He further said travelling in and out of Lagos would be restricted on Sunday, adding that all inter-state motor parks should shut down for two weeks.

The governor also signed into law the Emergency Coronavirus Pandemic Bill 2020 passed by the House of Assembly.

The law empowers the governor to punish violators of the shutdown order policy.