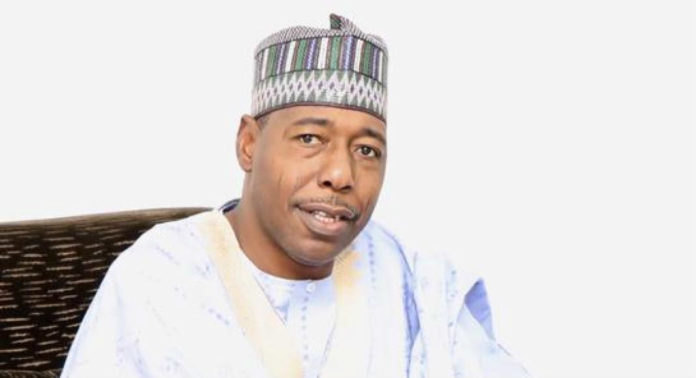 The Borno State Governor, Prof. Babagana Umara, has alleged that soldiers and policemen manning Borno highways are extorting his people.

The governor made the allegation after finding motorists stranded in Njimtilo where a gate was constructed on the highway to check the people coming in and moving out of Maiduguri.

Umara alleged that soldiers and policemen collected N1,000 bribe from travellers who did not have national identity cards.

Speaking on top of his voice, he  said, “How can you subject people to this kind of torture in the name of National ID card? And you are all here collecting N500 and N1,000 from poor travellers who don’t have national ID card.”

The governor said he had received several reports about the alleged extortion at the Maiduguri checkpoint and asked one of his aides to call the head of the military counter-insurgency operation in the North-East (Operation Lafiya Dole), Maj. Gen. Olusegun Adeniyi.

The governor spoke to Adeniyi, saying,  “Theater Commander where are you? …Right now I’m at the checkpoint near the state university and we have thousands of people stranded and your people are here collecting money from people because they don’t have National ID card. Why?”

He subsequently ordered the security men to open the gates on both sides to allow all travellers to move.

Some of the travellers who spoke to journalists, alleged that they have been held at the gate for several hours without any explanation.

One of them, a bus driver, Isa Adamu, said, “I left Damaturu since 9am and I arrive here at about 11am. But I am still here at 3pm.”

A woman, who said she was travelling from Bauchi to Maiduguri, said, “I was asked to give N500 because I don’t have ID card.”

Adeniyi, who rushed to the scene, told the  governor  that the gridlock was not caused by soldiers at the checkpoint.

He said it was as a result of an attack somewhere on the highway early in the day.

He promised the governor to investigate the allegation of extortion to see if it was true.

But this further infuriated the governor, who said, “It is true, I saw them with my eyes, I spoke with people that were asked to give money!”

How direct primaries can foster youth participation in governance, democracy –...