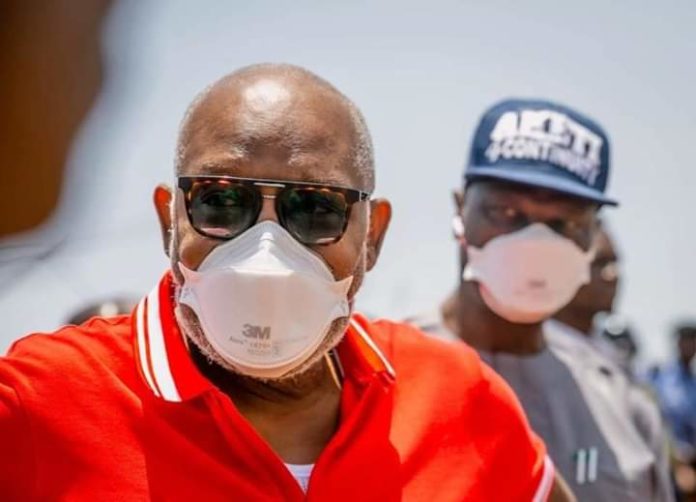 Ondo State Governor, Arakunrin Oluwarotimi Akeredolu,SAN, on Tuesday visited the site of last month’s explosion along Akure-Owo road to inspect the ongoing repair of the road which was cut off by the impact of the explosion.

It will be recalled that the explosion was caused when a truck conveying explosives to a quarry company in Auchi, Edo State, exploded at the Ilu-Abo area in Akure North Local Government area of the state.

Governor Akeredolu, who visited the scene of the explosion in company with his Chief of Staff, Chief Gbenga Ale, Commissioner for Works, Hon. Saka Yusuf-Ogunleye and the Special Adviser on Lands, Works and Infrastructure, Engr. Raimi Aminu, to inspect the ongoing construction the road, said the road is a major highway that connects both the southern and central senatorial districts with the northern senatorial district of the state.

He said his administration considered it imperative to swfitly repair the road in order to ease the movement of commuters plying the route to access the Northern, Eastern and Southern parts of the country from Akure and beyond.

While noting that the repair of the road is being undertaken by the Direct Labor agency of the state ministry of works, Governor Akeredolu said he has always been impressed by the competence and efficiency of the officials of the ministry.

Earlier, the Special Adviser explained that the reconstruction of the bad portion of the road was being done in line with the specification of the Federal Ministry of Works.

While assuring that the Federal Government would reimburse the state for fixing the road, the Special Adviser said the job would be completed within the next few weeks.

Riding on Lagos Blue and Red Lines will be affordable –...